You are here: Home / Fiction / The Last Archangel by Michael D Young @mdybyu 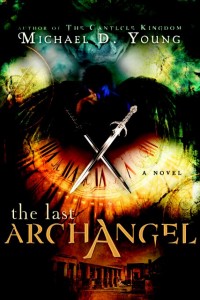 Xandir has been exiled to earth until the end of time. But when his cherub trainee disappears, Xandir makes a deal with rogue angels and giants that could restore life to the mortal woman he loves and end his assignment as a destroying angel in exchange for helping them bring about the end of the world and all of mankind.

What Inspired You to Write Your Book?
I have always enjoyed the lore about angels from different cultures and wanted to do something with angels that felt different than the other angel books out there.

How Did You Come up With Your Characters?
I put them together using bits of myths infused with character.

About the Author:
Michael is a graduate of Brigham Young University and Western Governor’s University with degrees in German Teaching, Music, and Instructional Design. He puts his German to good use teaching online German courses for High School students. Though he grew up traveling the world with his military father, he now lives in Utah with his wife, Jen, and his two sons. Michael enjoys acting in community theater, playing and writing music and spending time with his family. He played for several years with the handbell choir Bells on Temple Square and is now a member of the Mormon Tabernacle Choir.

He is the author of the novels THE CANTICLE KINGDOM, THE CANTICLE PRELUDE and THE LAST ARCHANGEL. He is also the author of the inspirational pamphlet PORTRAIT OF A MOTHER, a contributor to the anthologies PARABLES FOR TODAY and DARK STARS, the co-author of VOICES IN YOUR BLOOD and the author of several web serials through BigWorldNetwork.com. His most recent works are SING WE NOW OF CHRISTMAS, and CAROL OF THE TALES, two anthologies of short stories with the proceeds going to charity. He has also had work featured in various online and print magazines such as Bards and Sages Quarterly, Mindflights, Meridian, The New Era, Allegory, and Ensign.