You are here: Home / Fiction / The killer from Manilla by L.R. Currell 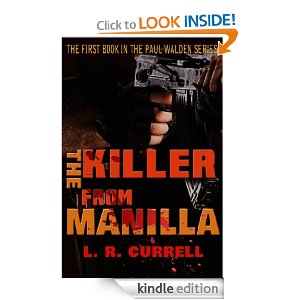 It’s only book one and the bodies are already piling up.

Paul Walden is a recently discharged, combat veteran who agrees to leave the army quietly after a scam he was part of is exposed.

In return for keeping his mouth shut, he is promised handsome rewards and a cushy job.

Sadly this turns out to not be the case.

He is given a job working the night shift in a factory performing manual labor. During this time he is fed only scraps from the table where he formerly sat.

His brother is in jail, his girlfriend is becoming increasingly distant and his former boss is not keeping his word. Paul’s life parodies a country and western song.

Paul struggles to readjust to the civilian world and experiences one letdown after another.

With the bills piling up and fate playing her hand, Paul soon utilizes his skills as a trained killer. He begins to believe that becoming a hit man could be the answer to his problems.

It offers a new start and the opportunity for unparalleled wealth but will he live to regret his decisions? Even worse, will he end up dead in a gutter? Or will his best friend, a former soldier turned police officer catch him in the act?

The killer from Manilla is the first book in “The soldier turns hit man” series.

Graphic and somewhat gory in nature, this book contains violence. Not recommended for persons under 15 years of age. Approx 49k words in length.

What Advice Would You Give Aspiring Writers?
Perservere. If you are doing what you love then steer the course.

L.R. Currell is an Australian author who currently has around fifty works in progress. His writing spreads over a variety of genres including but not limited to crime fiction, historical fiction, dystopia, horror, paranormal, action, post apocalyptic, science fiction and fantasy.

Currell served in the Australian Army for five years deploying twice during that time. He enjoys street art, good food, reading, film, krav maga and of course his main passion, writing. He is an avid traveler having spent time in more than 60 countries. It is L.R’s dream to one day see at least one of his books on the screen.