You are here: Home / Fiction / Romance / The Inn on Ravenna Road by Rachel DeLuca 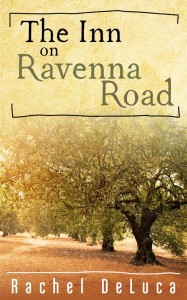 Nine years ago, Callie Richardson witnessed the brutal murder of her best friend and barely escaped with her life. Now preparing to testify at the killer’s trial, a new terror begins to threaten the fragile peace she’s found in the years since as an innkeeper of a bed and breakfast in a sleepy, seaside town.

Letters of unknown origin begin to arrive at Callie’s inn, urging her not to testify. She stubbornly refuses to give into the threats, doubling down on her refusal to live her life in fear. But when the letters start to threaten her livelihood, Callie finally goes to the police, only to regret it almost instantly when brooding cop Alec Delaney takes her case.

But Alec quickly blurs the lines between professional and personal concern as he forces her to confront the past she’s tried so hard to forget, and envision a future she never thought she would have.

What Inspired You to Write Your Book?
Truthfully, this book originated on Fictionpress. I’d been working a rather boring job for a long time, and as a way to pass the time I began to write. Over several years, I posted my original stories on various sites, and this book quickly became a favorite on the site. I got hundreds of reviews, awards, and reads. I was asked numerous times if I’d consider self-publishing, so I finally edited it and put it up for sale. It was thanks to the efforts of my fans on Fictionpress that this book is now available for purchase.

How Did You Come up With Your Characters?
I’ve always loved a good love/hate relationship. While probably unrealistic in real life, I love fiction because you can write your characters any way you would like. I knew I wanted Callie to be a strong-willed, independent, funny, woman. She is also a bit scared, and quite introverted at this point in her life. There is definitely a lot of me in Callie, particularly her humor and pragmatism.

Alec on the other hand is what I always love to read in a romance: Tall, dark, and handsome but quiet and taciturn, preferring to hide behind rules and order. Deep down there is a well of emotion and sweetness that I tried to tap into. Plus I just really have a thing for guys in uniform.

Book Sample
They stood quietly, listening to the racket of cicadas in the trees. The sun had long ago slipped beyond the horizon. Finally, Callie turned to look up at Alec, unable to stop the question on her lips – the one she’d been asking herself all day.
“Do you think I’m stupid?”
He furrowed his brow questioningly.
“Honestly, I can’t figure out what makes me more idiotic. The fact that I agreed to testify against Humboldt in the first place, or refusing to be scared by his threats.” She swallowed the painful lump in her throat, hating admitting the vulnerability to him.
Alec was quiet for a moment. He opened his mouth, and then shut it again. Finally, he said, “I think…you’re stubborn. And opinionated and you’re unwilling to accept help when it’s offered and based on how well you listen I have seriously considered the possibility that you might be sporadically deaf.” He paused. “But I don’t think you’re stupid.”
“How do you do that?” Callie asked, a smile in her voice.
“What?”
“Make an insult sound like a compliment.”
He chuckled. “Skill. Now it’s late. You should go in.”
“I’m fine. I just wanted to enjoy what’s left of the warmth while we have it.”
Alec looked down at her, his eyes pools of black in the darkness. “Well, I have to go and it would make me feel better if I knew you were inside first.”
She stared up at him, her heart beating slightly faster at his closeness. Why did he make her feel this way? She hated the confusing jumble of emotions, wishing she could just decide once and for all how she felt about him.
“Alec-”
“This is what I mean by stubborn,” he said, putting a hand on her arm and turning her toward the house. “Just humor me, would you?”
She wasn’t sure he could see her, but rolled her eyes anyway, then began to walk slowly back toward the porch. The lamp was on, casting only a small pool of light around the entryway, the rest of the yard plunging into darkness.
“Callie.”
Alec’s voice came from the shadows behind her. She turned and his eyes found hers in the dimness.
“What you’re doing isn’t stupid. It’s brave.”
This time he did not turn away, but held her gaze for a moment as she gave him a grateful smile. She was the one who looked away first, ducking through the doorway to hide the rising flush of her cheeks. Once she was inside and had shut the door and turned the lock, she watched through the window as he retreated into the darkness.

About the Author:
I’m a professional who works in higher ed, a mom, and a wife. I’m also a closet romance writing addict! I love nothing more than exploring the emotional drama of new love. I always think I’m going to write something light and witty, but it’s only when the characters are wading through a sad pile of hypothetical tissues that I’m truly happy. So I’m trying to embrace that. In my spare time (read: hardly any) I’m an avid reader, a cook (as long as there’s wine involved), and TV binge watcher.