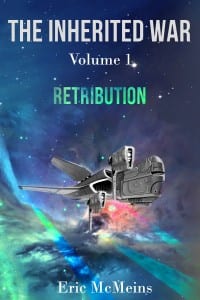 Cole Smith is the product of decades of alien experimentation. Cole and the Doctor that created him must fight enemies, both old and new to free themselves from captivity, while unlocking the secrets encoded in his DNA by humanity’s ancestors. He must find the birthright that was hidden away for him in the far reaches of the galaxy and reunite his ancestor’s allies to aid in his fight. Using that technology, Cole will try to defeat his enemies, enemies that have destroyed the Earth and sent the human race into extinction. Or die trying.

How is Writing In Your Genre Different from Others?
Everything is open and fair game in Sci-Fi. If you can imagine it and give it a plausible sounding back story you can write it. It also has some of the most hard core fanatics of any genre. They can pick apart your science and tech, grammar and spelling like a collage professor. But when you impress them they are fans for life.

Author Bio:
Eric McMeins was born in the foothills of the Cascade Mountains, in the little town of Carnation Washington. He joined the United States Army and spent 4 years as an Infantry Man in the C Co. 1/187th Rakkasans at Ft. Campbell Ky. He has spent the last dozen years in service to the USPS as a letter carrier and has only recently begun writing. Follow me on Facebook (Eric McMeins author page) or on twitter @ericmcmeins

What Inspired You to Write Your Book?
I have been reading/watching/playing sci-fi and fantasy since I saw The Empire Strikes back at the age of three. My love of sci-fi was passed on to me by my father. With hundreds of books filling my library(everything from Piers Anthony to Tim Zahn) I finally decided to try my hand at the craft. First I wrote to see if I could. Then I wrote to see if I could finish a whole novel and finally I continue to write because I truly enjoy doing it. I have finished the first two books of my trilogy and am starting the third.