You are here: Home / Fiction / Action & Adventure / The Infected (Book 1 of The Infected series) by Scott Ganley 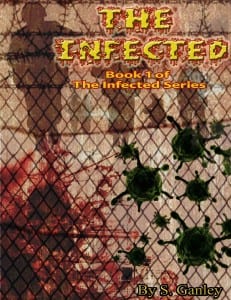 It began as a terrorist attack against the United States and Europe. Middle Eastern terrorist squads were infected with a virus engineered to strike at the heart of the Western world in the name of Islam and the holy jihad. When the virus mutated without warning, the infection took on a dimension and scale beyond any rational explanation. Spreading across the globe like lightning, it left millions dead in its wake. Worse than the initial body counts are those that suffered catastrophic and irreversible brain damage. These infected retain nothing of their former selves and instead are reborn in an aggressive animal like state with the sole impulse to find and kill the small handful of survivors immune to the virus.
Hunter Ashcroft served proudly in the Iraqi war until a sniper’s bullet cut his career short. Now back in the civilian world he is working hard to make the adjustment in his life. Life in rural Kentucky is boring and monotonous after serving many years in the Army and traveling the world. However he finds that overnight the world has changed and he would give anything to return to that quiet boring life.
Hunter teams up with a small group of survivors as they flee the more dangerous population centers in search of refuge in the countryside. He soon finds that infected are not the only thing he must fear as disillusioned survivors start to see an opportunity to take advantage of the chaos and turmoil for their own selfish needs and desires. Hunter must now lead a band of civilian and military survivors to safety against impossible odds.

How is Writing In Your Genre Different from Others?
The Infected series is not your typical zombie novel. It begins with terrorist attack using soldiers infected with a deadly virus. The virus mutates and leaves millions in a zombie like state. Later books introduce a metamorphosis that does change the infected into zombies.
The difference from this brief synopsis is that instead of a single event instantly changing everyone into zombies, it is an evolution over time. The survivors in the story are faced with a hostile world where they must deal with the challenges and hazards of a post-apocalyptic environment.


What Advice Would You Give Aspiring Writers?
Write. Write every day. Write about anything you can. Even if your initial writing is terrible, keep writing, you will only get better. You also need to do it because you enjoy it, if your goal is to get rich this is not the field for you.

Author Bio:
Scott Ganley is a former Military Policeman with the United States Army. He has seen duty in countries all over the world including Central America, Korea and Europe. He served in Operation Desert Storm along with his drop dead gorgeous wife of 21 years, Amanda. Together they have two beautiful college age daughters. Scott also has two grown twin daughters who live in Germany and a darling 2 year old Grandson from one of them.

An avid reader of most adventure and action books his favorite authors include Stephen King, Tom Clancy, Michael Connelly, Lee Childs and others. He enjoys reading zombie and apocalyptic themes and has amassed an impressive Kindle Library with such books in recent years.

Scott has a Master’s Degree in Public Administration and currently works for two separate departments of a University in Western Kentucky in Information Technology. Originally from Northern Virginia, he has lived with his family in Kentucky for the last 20 years following the end of his tour of military duty at Fort Campbell, KY.

His current writing project is a zombie series entitled “The Infected”. Books 1 (The Infected), 2 (The Infected: Gerald’s War) and book 3 (Rise of the Zombies) are available online with Amazon. The series was originally planned to span only three books but ideas for a fourth and fifth are proving too tempting to pass up.

What Inspired You to Write Your Book?
My children have to be my number one inspiration. I have always enjoyed writing in academic and as a hobby. My daughter finally challenged me to actually start putting my work out there for others to enjoy. I decided she was right and began to polish up some of my work for online publications. The experience so far has been rewarding and the feedback positive enough that I am sure I will continue with it for years to come.