You are here: Home / Autobiographies, Biographies & Memoirs / The House on Wilburtha Road by Fleury Sommers 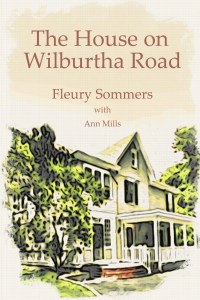 What inspired you to write your memoir?
As I grow older, I’ve noticed that the passage of time tends to distort the reality of an era. Looking back at the 1950s, particularly, it seems to me that a number of historians and novelists appear to have some kind of ax to grind. The fifties, for example, were uniformly stifling for women. All Southern people hated blacks. Men didn’t parent their children. You get the idea.
This kind of selective recollection does a disservice to children who are then educated with a single viewpoint. If the histories and novels thus produced have any staying power, they encourage subsequent generations in the same narrow perspective, that is, in the same selective recollection. They do a disservice to those of us who lived through a period of time and know that conventional wisdom is wrong…or at the least incomplete.
I’d go even further and assert that this kind of selective recollection corrupts an individual’s understanding of his or her personal history and, if collectively embraced, shades a society’s understanding of its culture and values.
My family is from Chattanooga, Tennessee. We moved to New Jersey in 1957 under circumstances described in the book. The family included five children, our mother and father and a black woman, Amelia, who had taken care of us since we were babies.
Do these circumstances present a unique perspective for readers of a period when Jim Crow died its ugly and lingering death? When lynchings were a fresh and hateful memory and a source of national shame? When the issue of civil rights began to affect our collective conscience?
I think they do. Most important, I wanted to tell the truth, the good and the bad.

About your Book:
In its way, the decade of the 1950s was as tumultuous as the 1960s. New transportation systems changed where people lived and worked. New products and technologies changed how they lived. Advances in medicine changed whether they lived. A boom in baby births dramatically reshaped family life. And, the emergence of the Civil Rights movement forever changed the way races of people understood and lived with each other.
This is the story of the impact of those changes on one family, transplanted from the Deep South to New Jersey in 1957. A profile of parents, five children and a black housekeeper whose lives bridged the Jim Crow South and the Civil Rights era.
It is a narrative at once personal and representative of a unique period in American history. For anyone interested in “what really happened,” it is an insightful and intimate story.

How did you decide how to publish your book and where is it published through:
I wanted to make this book available to the members of the generation who came before me who are still alive. So, it was a no-brainer to publish on Amazon – Createspace and Kindle.

How do you see writing a Memoir as different from writing other genres of books?
For one thing, context is important and you have to get it right. For example, my book touches upon the prevalence of syphilis among blacks in the deep South. This means I had to understand the Tuskegee experiment, what it did and didn’t do; the profound failure of access to routine medical care for blacks in the old confederate states; and, even the language used by blacks to describe health concerns.
If the book is fiction, the writer is often given a pass if he or she gets an historical detail wrong here or there. Fiction writers can even play with historical details to make them fit a narrative. But, if you get the history wrong in a memoir, you’ve given the lie to everything you’ve written.
Writing a memoir is not for the faint of heart.

Author Bio:
I’m a professional writer and editor, first as a promotional copy writer at a New York publishing house, then as an award winning editorial writer and columnist for Cox newspapers and later in public relations. Graduated from Barnard College, Columbia University and earned my masters from Northwestern University.