You are here: Home / Fiction / Horror / The House on Judith Street by Monte Plaisance 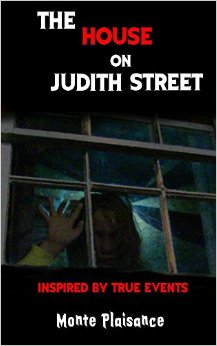 After a long string of uneventful investigations, The NightStalkers paranormal research society has finally found a house that promises to be highly active. A double murder and suicide, followed by a string of mysterious deaths have left the house abandoned for over 40 years. Now that the house is slotted for demolition, the NightStalkers have a short window of opportunity to investigate the most notorious location they have ever been in.

What they encounter during their investigation surpasses anything they could have possibly imagined. The angry ghost of a murdered little girl, evidence of occult activity, a dark presence that threatens to destroy them all and a distant past which they all share, but none of them can remember. Will they solve the mystery of their connection and rescue the soul of the little girl, trapped in a hellish purgatory? Or will they succumb to the dark presence that seeks to destroy them and revenge itself? Inspired by actual events, this is a story like nothing you’ve ever read before.

What Inspired You to Write Your Book?
The House on Judith Street is based on an actual paranormal investigation that I went on with some friends during my college years. I had to change the names of the characters, but the story is based on what actually happened. The events that transpired in that house changed all of our lives forever.

How Did You Come up With Your Characters?
The characters and loosely based on the actual people I knew back then. They are not exactly the same, but they share a lot of the same characteristics. These characters quickly took on a life of their own as I started writing the story.

Book Sample
Daniel, more than any of the others, understood Christine’s dilemma in accepting the events of the past few days. Acceptance of certain truths is always difficult when those truths contradicted an already accepted system of belief or understanding. Daniel was also struggling with a similar crisis of faith, but having experienced the events, his proof was far more substantial and irrefutable than Christine’s.
Sitting at his desk now, he shuffled through all of the photos and papers for the house on Judith street. His preliminary photos, his research notes, the photos he’d taken during the investigation…it all seemed so distant now. Like time had expanded and the events were just a distant memory. Their paranormal naivete had been shattered along with Daniel’s scientific certainty. He was standing in the landscape of a new world. One that neither he nor the others even had a map to navigate. They were lost.
The lamp on his desk flickered for a second. Daniel thumped the metal cover for the lamp and the light glowed steady again.
A tapping sound came from the window next to him. Instantly, a fear gripped his heart. He was on the second floor, nothing could be tapping on his window. The lamp flickered again. Daniel sensed immediately that something was wrong. His head began to swim and adrenaline coursed through his body spreading a heat to counter the chill that froze him in his place.
“Go away!” Daniel yelled at the window.
TAP…TAP…TAP…TAP…
Despite his fear, Daniel reached out and yanked the curtain back. A large crow was fluttering outside of his window.
“Caw…Caw…” it cried and flew away. Daniel followed the flight of the bird as it soared into the night sky. That’s when he noticed something that caused his heart to leap into his throat.
Standing on the opposite side of the street, directly under the street light, was a man staring straight up at him. The man was obviously a vagabond, his tattered black hoodie pulled up over his head and shadowing his face. Just his nose and his chin could be seen in the street light. Something about the man was unnerving, but Daniel couldn’t figure out what it was; until the man lifted his arm and pointed directly at him. The man’s arms were twice the length of what they should have been. Long, stick-like protrusions were located where his fingers should have been and one of those protrusions was pointed directly at Daniel.
“Oh my god!” Daniel gasped at the unnatural sight. He quickly slid the curtains closed and tried to think of what he could do. Call the police! he thought. He ran to the kitchen and grabbed the phone. Instead of a dial tone, he heard the crackling of static and then a loud whining sound. Abruptly, the sound of 1940s big band music echoed through the phone – the voices of young girls singing a song that nearly turned Daniel’s hair white with fright.

“There’s a spook in tinpan alley walking on the piano keys. He’s the jiving ghost who can make the most, of his rhythm making tendencies.”

A loud thud hammered on Daniel’s front door. He jumped with such a start that he dropped the phone receiver onto the floor. The childish voices continued to sing:

“So, better watch out, someone’s about, hauntin’ the town with new kinds of rhythm. You may meet the boogie woogie boogie man.”

The bang came again to the front door, followed by the doorbell ringing repeatedly. The combination of the sounds of the banging, the doorbell and the music coming up through the phone were overpowering Daniel’s senses.
“If you see him once, he’ll really hex you; yes that man can really vex you. With his bass, he almost wrecks you; He’s the boogie woogie boogie man!”

Daniel cupped his hands over his ears and screamed, “STOP!”

Buy The House on Judith Street On Amazon