You are here: Home / Fiction / Romance / THE HIDDEN TRUTH by Janeen Swart 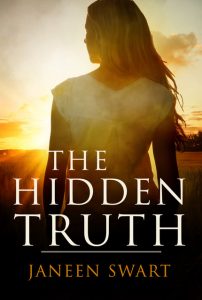 After being struck by lightning while jogging, Clara’s dreams cause her to question the issues of DNA changes, cloning, and genetically modifying food. In her dreams she visits an environmentally perfect world where an angel-like being tells her to watch for a sign. While Clara searches for answers, her boyfriend, Brian, becomes active in demonstrations against a local biophysics company, named aptly, New Nature. Clara convinces her Science Club to begin a project to confront this company to make them more accountable. She and John, a new friend, vow to do their part, using peaceful strategies. Brian’s jealousy results in several uncomfortable incidents between the three teens. Things go awry when a few of the Science Club members go beyond simple investigation by breaking into the company, then later sabotaging the company’s biosphere. What’s even more troublesome is the fact that Clara suspects her ex may be the one behind the crimes. Relationships and beliefs are tested as Clara searches out the truth. In the end, her questions are answered, but at a cost, she hadn’t anticipated.

What Inspired You to Write Your Book?
After retiring from teaching at age fifty-five, it was time to move forward with my dream of writing. I took two online courses from The Institute of Children’s Literature and a Children’s Writing Course through Indiana University Northwest. Now I thought I was ready and would soon see my stories in print. Not immediately, but after many rejection letters, A DOG AND HIS BOY, was published through a small Christian publisher. I self-published my other five children’s books using Create Space. During this same time I had joined an online critique group and through that group, my young adult novel, THE HIDDEN TRUTH, became a reality. I submitted it to Soul Mate Publishers and was ecstatic when I received my contract to publish it as an e-book. My experience with the Soul Mate authors has been awesome.

How Did You Come up With Your Characters?
I knew I wanted to develop a sweet teen love story. I needed a conflict to make the story move forward, so I created a past love interest for Clara, who became a little crazy because she rejected his advances. I experienced a similar situation in my teen years, so I know this can actually occur. The other two characters, Clara and her new boyfriend, John were sort of based on my granddaughter and her boyfriend who both are into sports. Their relationship shows how much they want to be together as both friends and future lovers.

Book Sample
Brian jumped in and turned the key. The ignition ground, but started. As soon as Doug left, Melanie scrambled into the passenger side and said, “Let’s go. Doug can find his own way back. We don’t need him anymore.”
“No, we’re not leaving him. He’s the one who got us in there like you wanted.”
“Me? What happened to ‘We’ve got to do something about this company’? You were just as much in favor of this. You’ve gotten soft because you’re afraid Clara will find out,” said Melanie.
“You’re wrong. I was hoping we could find something, so we could get it out to the public.”
“Oh, right. Then Clara would look at you again with those adoring eyes.” Melanie grunted. Brian leaned back against the headrest, waiting. She was right.
Doug’s image materialized in the rearview mirror. He was running toward the car, arms waving. Twenty feet behind him, two other figures sprinted their way. “Open the back door,” Brian yelled at Melanie. She leaned over the front seat and pushed the door open just as Doug reached the car.
Brian put the car in gear with his foot on the brake, ready to take off. Doug fell in, slammed the door behind him and Brian tromped on the gas. Tires squealed and a faint smell of burnt rubber entered the car’s open window. One of the guards grabbed at the door handle but had to relinquish the chase as the car sped away. Please God, don’t let them see the license number or shoot.
“Good thing I covered the license plate with foil,” said Melanie.
Brian just stared ahead, saying a thank you prayer. Melanie watched behind. “No one’s following. You can slow down.”
They drove several more blocks and Brian asked, “Did you get the power inverter?”
“No. When I went inside, I heard the guards coming and I had to make a run for it,” said Doug.

Buy THE HIDDEN TRUTH On Amazon