You are here: Home / Fiction / Science Fiction / The Haunting of The Hockomock Swamp by H.E. Kline 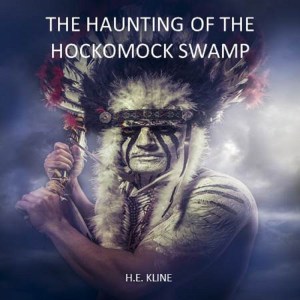 Janie Williams falls upon a sensational news story involving a childhood epilepsy epidemic raging across several towns in Massachusetts abutting The Hockomock Swamp. Problem is: she’s a newbie and her bosses don’t think this story is quite “newsworthy.”

As Janie investigates and researches this phenomenon, she falls deeply in love. The Haunting of The Hockomock Swamp is a powerful love story that will take you on an unforgettable journey of the heart, mind, and soul as you follow an Indian ghost deep into the woods.

What Inspired You to Write Your Book?
I have been having dreams about following a handsome Indian brave into the woods since I was seven. He would show me very scary and troublesome visions that I couldn’t understand as a child. The Indian brave is named Metacom or King Philip who was a great man and sachem or leader of the local Wampanoag tribe who launched the very first US/Indian war known as “King Philip’s War” as his people were being brutalized by the English settlers and his land taken away by the courts via an old English legal doctrine called “vacuum domicilium” which translates to “the land is vacant, the land is unoccupied.” Because the Wampanoag, as most Native American tribes, were nomadic by nature, it was deemed that their land was not owned by them and hence could be taken “legally” by the English King and legally claimed by the colonies.

How Did You Come up With Your Characters?
Well, Metacom is the shining star of this novel as this is his people’s story. Janie Williams, along with the other main characters such as Jessie Winslett, are actually people who I have known and deeply respected.

Book Sample
THE HAUNTING OF THE HOCKOMOCK SWAMP

‘Mmm,’ Janie said leaning in for a kiss. They couldn’t put The Haunting of the Hockomock Swamp down. They read until 2:30 a.m. before reading the final passage:

‘I don’t know why Metacom chose me. I’m not special. I’m no different than any other kid.’”

Suspenseful, romantic, and enmeshed in Native American ghostly folklore, The Haunting of The Hockomock Swamp will capture and captivate the imagination of men and women, young and old, blurring lines. I challenge you to Google along with Janie and discover who Metacom is….