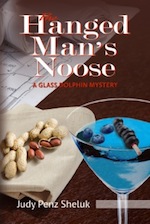 Journalist Emily Garland lands a plum assignment as the editor of a niche magazine based in Lount’s Landing, a small town named after a colorful Canadian traitor. As she interviews the local business owners for the magazine, Emily quickly learns that many people are unhappy with real estate mogul Garrett Stonehaven’s plans to convert an old schoolhouse into a mega-box store. At the top of that list is Arabella Carpenter, the outspoken owner of the Glass Dolphin antiques shop, who will do just about anything to preserve the integrity of the town’s historic Main Street.

But Arabella is not alone in her opposition. Before long, a vocal dissenter at a town hall meeting about the proposed project dies. A few days later, another body is discovered, and although both deaths are ruled accidental, Emily’s journalistic suspicions are aroused.

Putting her reporting skills to the ultimate test, Emily teams up with Arabella to discover the truth behind Stonehaven’s latest scheme before the murderer strikes again.

What Inspired You to Write Your Book?
I had written a short story featuring Arabella Carpenter, the owner of the Glass Dolphin antiques shop in the fictional town of Lount’s Landing. The story wasn’t particularly good, but I loved Arabella and the town I’d created. On Christmas Eve, 2011, with 10 days of vacation time (a rarity when you’re a freelance writer/editor) and no real plans, I decided to take the story and see if I could develop it into a book. By the time my vacation was over, I’d written a dozen or so chapters. After that, I was hooked. I wrote every day until I finished the first draft, which was in July 2012. I revised and revised and revised and started submitting to agents in 2013. I received a lot of great feedback, but no offers. I revised some more. Then, in February 2014, I submitted the manuscript to Barking Rain Press. They offered me a contract in July 2014 with a publication date of July 2015.

How Did You Come up With Your Characters?
My protagonist is Emily Garland, a 32-year-old freelance journalist who covers the Toronto condo market. She’s offered a lucrative assignment in the small town of Lount’s Landing, where she is sent to find out the true story behind a developer planning on converting an old schoolhouse into a megabox store. As a journalist who has covered the housing market for some time, I’ve seen first hand how passionately opposed people can be when it comes to development in their communities. Emily isn’t me — for one thing it’s been a very long time since I’ve seen 32, and for the other, I’ve never been offered a lucrative assignment – but my experiences and understanding of her world certainly helped to shape her.
In one of my day jobs, I’m the Senior Editor of New England Antiques Journal, and so the antiques shop character of Arabella Carpenter was a natural fit. Arabella is feisty and she doesn’t want any part of this megabox store. But she also lends an interesting balance to Emily.
The third major character is Levon Larroquette, an antiques picker who happens to be Arabella’s mentor and ex-husband. In my head, Levon looks just like Kris Kristofferson in A Star is Born, minus the beard. But the shaggy hair, the blue eyes, the charisma and sex appeal — that’s Levon.
The fourth major character is Johnny Porter, owner of It’s a Colorful Life, a paint store on the town’s Main Street. Johnny is the Chairman of the Main Street Merchants’ Association and the voice of reason. You always need a voice of reason!