You are here: Home / Fiction / The Girl With Nine Lives by Elizabeth Earle 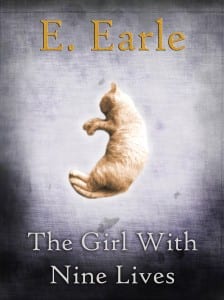 Fondness of rum? Check. Job heading nowhere? Check. Mastermind criminal boss discovering you have unravelled their plot? Check. Talking cat with an addiction to catnip deciding to take control of the situation? Check. Welcome to the lives and adventures of the ginger moggy Ben and his human, Ellie.

Ellena Blackwell is your average woman- desperate to make the best of her Degree and failing miserably. Falling into such a hole of self-pity, even her cat, Ben, is sick of her and tells her to snap out of it.

And that’s when Ellena realises she has a talking cat, and he’s not going to go away anytime soon.

Having a devious crime boss as Principal to the college she works at, Ellena discovers a dangerous secret that the Head Office would very much rather that she didn’t know. Deciding to take control of her life, Ellena enlists the help of Ben to investigate as soon as her friend goes missing.
But Detective Calloway is determined to get involved, and Ellena soon learns that Ben isn’t the only one who thinks he has nine lives.

How is Writing In Your Genre Different from Others?
I think because it’s a subtle mixture of fantasy and fiction. I had no idea which genre to put this book into when I had finished it. It popped into crime/fantasy/fiction/spirituality/family and women’s fiction. Even now I am unsure of it’s genre. I would like to think what I write is something new, but I try not to think about it too much. I write what I enjoy to read.

What Advice Would You Give Aspiring Writers?
*Get yourself a good book
*Make sure your front cover is perfect- the front cover is what usually lets Indie Authors down.
*Reviews, reviews, reviews! Get as many as you can.
*Establish yourself with social media- Facebook, Twitter and getting a website sorted.
*Don’t take it personal- constructive criticism is good.
*Think long term- a week long of promotion on your book is no good. You need consistency. Things take time. The more your name pops up on the internet the better.

Author Bio:
Elizabeth Earle started life by waking up and becoming unsatisfied with reality. A member of a big family, always being lumbered with the stool at Sunday Dinner and specialising in beating grown (somewhat tipsy) men at left handed arm wrestling, she is the author of Tartarus and most recently The Girl With Nine Lives. She can be found looking for buried treasure in your gardens, can be heard singing Queen (terribly) in the shower, and seen in the shadows of Warwickshire, cooking up another story. Elizabeth studied at the Norwich University College of the Arts after studying a National Diploma in Fine Art. Within the first year of studying a Degree in Fine Art, she quickly changed her mind and decided to pursue her life long ambition of becoming a writer, and embarked on a BA (Hons) in Creative Writing. Since then, she has had various careers concerning making balloon animals, serving drinks to drunks, making cakes for charity, teaching inmates various subjects such as art and design and life and social skills, and finally settled on a job at a local college. Elizabeth’s favourite places are Stratford Upon Avon, Warwick Castle, Arley Woods and of course round her Nan’s for Sunday Dinner. Elizabeth’s hobbies consist of eating her weight in chocolate raisins, maltesers, attempting to extend her knowledge beyond 5 chords on the guitar, writing and drinking a vast amount of tea. When not hiding away writing, Elizabeth likes to spend her time with friends and family, occasionally feeding the rabbit, Stavros, and sitting back relaxing with the-bloke-with-the-beard.

What Inspired You to Write Your Book?
The Girl With Nine Lives is strikingly similar to my own life. Not that I have no own talking cat- that’s on the Christmas wish list, but the struggle of going through depression. My mother was a single parent, and that had its hardships coping with two young girls. The ups and downs of childhood was helped by a mangy moggy called Ben. He was our childhood cat. Strange thing to do to star a childhood cat in a book? Maybe so, but Ben for me was a glowing ginger anchor in a world of grey.

When we moved house for a fresh start, Ben got old and ran away. I always have regrets somehow that I wished we had given him a better life. He seemed to be the perfect hero to star in a book. Last year, I wrote Tartarus as an outlet for my nightmares. Ben would often star in my nightmares and drag me out of it. I wanted to reward him with immortalising him on paper.

Depression is still a taboo subject to talk about, and when The Kernel Mag hosted a 30Hour Novel competition, my subconscious streamed out a flurry of cat adventures. I had no idea I felt the way I did. The rules were simple, write for a full 30 hours over Saturday and Sunday and then submit your work to Harper Collins for consideration.

I dehumanised myself that weekend. My subconscious had no choice but to cough up all of those memories of Tamworth, mixing with the recent of Nuneaton, bound together with a ginger cat whose idea of grooming was smothering himself in oil and grit. I didn’t wash. I didn’t eat. I didn’t move from that godforsaken chair all day and all night. It was a day of fun for my boyfriend. The football went on, Match of the Day recordings, the pub was visited, a great night with the lads was had and beer came and went. Me? The only time I graced my body with a new set of clothing was with a clean pair of pyjamas.

For the first time, I came face to face with mental illness and was diagnoses with anxiety and depression last year. Writing The Girl With Nine Lives was a perfect outlet of this It was a time where I could reflect on the things that had happened and voice my thanks for the comfort from a loyal ginger moggy.

In the story, Ellena Blackwood is going through a hard time at work. She falls into a state of depression, which only starts to lift after finding a ginger stray sitting on her doorstep. The stray, looked an awful lot like her childhood cat Ben.

Ben has come back, older than possible in cat years, an unhealthy appetite for catnip- and something else. He can talk.

With his help, Ellie heals and together they discover a dark secret at her workplace that the secret crime boss principal would rather they not know.

I found even after the competition, I was desperate to get back to it. I returned and turned it into a book. I wanted to expose the goodness of our household pets, show that sometimes that unconditional love can be something that can drag us from the darkest moments.

I am currently writing the sequel, and intend to bring out a series of books.