You are here: Home / Fiction / Mystery/Suspense / The Gangster’s Wife by Anne Brooke 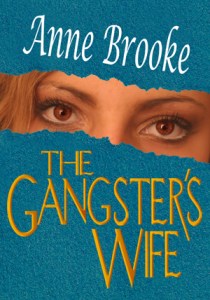 When 53-year-old Elise Walker returns home after a day at the office to find her husband Gerald dead of a heart attack, she doesn’t expect a visit from the police with revelations about Gerald’s secret life.

Soon, however, her own life takes a distinctive turn for the surreal, with missing loot, online crime and curious neighbours the least of her problems. Not to mention trying to deal with never-ending funeral arrangements and stay on top of her job.

Thank goodness then for the support of her ever-reliable boss, Hugh. But will even he turn against her when she decides to contact Gerald’s former gang members to find out more? And what is the real significance of the note Gerald left her? Most important of all, if Elise ever finds the money, will she be able to keep it?

What Inspired You to Write Your Book?
As an older woman myself, I wanted to show that older women can be quirky and brave just as much as younger ones can! I also love crime and comic crime novels, so bringing crime and the older woman together seemed like the next step in my writing career.

How Did You Come up With Your Characters?
Elise is an amalgamation of several friends of mine, though I like to think she has something of my own view about the oddities of life. I also based secondary characters on the people I know at work and in my neighbourhood. It’s best to write about what you know, they say!…

Book Sample
For the remainder of the evening – Gerald’s last on this earth and in their home – Elise simply let things happen as they would. At one point, she found herself in the local hospital, with Lottie at her side, and agreeing with whatever the officials there wanted to do with Gerald’s body. Words drifted past her, only some of them reaching what must have been their mark. At another stage in this long, stretched-out evening, Elise became aware she was holding Lottie’s hand so tightly she wondered if she’d ever be able to let go. And what would happen when she did.

Finally, at the end of the night, Elise arrived back at her own front door, Lottie still at her side like a friendly, all-seeing shadow. If shadows could even see, or would want to. Elise was so tired that she could have abandoned any ambition of going to bed on this, the first night of her widowhood, and simply stretched out across her threshold and let the elements and people rage around her in whichever way they felt appropriate.

Such behaviour would of course be most unacceptable in Surrey and she was sure it wouldn’t be tolerated, more from kindness than disgust. In any case, Lottie, bless her, would never have countenanced it. She was too socially concerned a woman: it was a gift Elise had never possessed but which she was grateful for now.

The other reason she would not have been permitted to lie like a tramp or a guard dog across the front door was the presence of the police officers. When Lottie had parked the car across the front of Elise’s drive, Elise had been only vaguely aware of the lurking shape of the police car waiting on the other side of the road. She’d even admonished herself for assuming it was anything to do with herself. Just because her husband – poor Gerald! – had died today, it didn’t mean she was the centre of the local universe. Lives went on elsewhere, and why on earth shouldn’t they? Before entering her home once more, Elise even watched and wondered if there might be about to be some mistake as the two police officers got out of the car and began to stroll, almost casually, in her direction.

Lottie waited, silent but companionable, at her side.

“Mrs. Walker?” the nearest of the two police officers spoke as he stepped onto her drive. “May we have a word?”

He was a tall man, towering over his smaller, female colleague, who looked very young indeed. Almost too young to have such a responsible job. Elise wondered if this might be the poor woman’s first assignment and if she’d been chosen simply because she was female. Some things never changed, no matter how many years went by.

“Can it wait till morning?” Lottie spoke first and her hand was warm and steadying on Elise’s arm. “It’s been a terrible evening. I think Mrs. Walker needs to rest.”

“No, it’s fine,” Elise cut in, and gave Lottie’s hand a gentle squeeze. “Whatever it is, I’d rather do it now. I mean, what else can happen to make things any worse than they already are? I’d much rather put all my sorrows into one day, if I can.”

The younger, female officer glanced away and seemed to swallow, while the elder one coughed.

“Well, Mrs. Walker,” he said and this time his voice was far more hesitant. “It’s about your husband. If it’s not too difficult for you, we do need to talk to you about Mr. Gerald Walker, and the sooner the better.”

When not writing, she spends time in the garden attempting to differentiate between flowers and weeds. Occasionally, she can also be found in the kitchen making cakes. Every now and again, they are edible.