You are here: Home / Fiction / Romance / The Future Memoir of Ann Jones by Alex Bailey 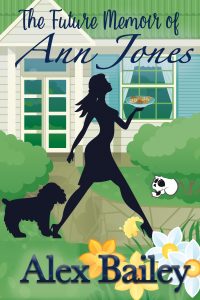 Alex Bailey was a bored writer/editor of documents as monotonous as vacuum cleaner manuals. She left that life behind to create more exciting worlds than the one she lived in. The Future Memoir of Ann Jones is the first book under her assumed identity. When she’s not listening to friends reveal wild stories about their future, she’s tending to her organic garden while belting out show tunes. Ironically, Alex does not have the patience to sit still long enough to knit. Some of her favorite hobbies include: embarrassing her children in public with her rhythmically-challenged dancing, cleaning the small disc around the stopper of the bathroom sink, and dallying. She’d love to tell you more about herself, but as you know, she is incognito so as not to reveal the true identify of her friend, Ann Jones.

What Inspired You to Write Your Book?
Karma is a powerful force in the universe. I don't want to give anything away, but I was thinking about karma when I wrote this book-how it works for…and against us. Thinking of karma naturally led my thoughts to chocolate chip cookies. Perhaps a recipe or two may be found in the back of the book?

How Did You Come up With Your Characters?
A better question is, does each and every character have some element from I've come across in my real life? Absolutely! For example, my husband really does snore. Very loudly. Some elements are from people who have wronged me…or those I love. None of the characters are entirely from any real people, living or dead, but the pen truly is a mighty weapon, indeed. Revenge, especially on paper, can be cathartic. I'm not saying anyone has been murdered in this book, but I can say there are more than ten mysterious deaths.

Buy The Future Memoir of Ann Jones On Amazon