You are here: Home / Non-fiction / Personal Growth / The Excellence Habit by Vlad Zachary 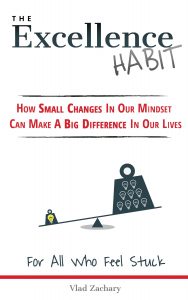 The Excellence Habit is biography of an idea, and the idea is simple. The main source of success is excellence, and excellence depends more on our internal circumstances. Grit, determination, and the discipline to put in the hard work as a matter of habit, and not a matter of need, are crucial. The Excellence Habit is a reminder that we are the owners of our success. There are no magic formulas, shortcuts, or secret sauce. We will learn from many, yet the most important steps, we need to take on our own. Over the course of our adult life, it is always us, who have the most power. We will not always be in control and nobody is. But we can choose to maximize our effect on this planet, on our loved ones and on our personal fulfillment by building an Excellence Habit.

The Excellence Habit examines the distinction between success and excellence. Success is achieving high goals. Excellence is doing the right thing, even when not driving towards any goal. It is a small mindset shift, which produces big results. Excellence can and will lead to success. Success, on the other hand, can be the biggest enemy of excellence. More often than not success is measured in social influence, recognition and wealth. For those practicing it faithfully – Excellence is its own biggest reward!

The book is unique because it stays away from offering trivial advice and instead focuses on discussing big ideas and powerful stories, relevant to the theme of success and excellence.

What Inspired You to Write Your Book?
The need to share what I’ve learned. About a year ago I was searching for a special kind of inspirational read. After going through a ton of wonderful titles, I realized that none of them gave me quite what I was looking for. At that moment I decided to put together a narrative that covered a lot of what I learned, and had the kind of silver lining that would work for me. This is how The Excellence Habit was born.

Book Sample
When we discuss the power of context and its role in building our Excellence Habit, the assumption is that all context is external. However, there is another kind that really matters. This is our internal context. On any given day, we wake up, and the stream of our consciousness starts and takes us through our morning routine. Without major changes, our mental state tends to become more and more habitual. If there were no outside disruptors, the trends in our lives become more clearly outlined. If we liked our first job, we tend to like the second one as well. If we were driven in college, we tend to become more ambitious in our careers. Within the context of our minds, we take the facts from our daily lives and process them against our personal history. With each day, any changes that we make are less and less noticeable. Based on our beliefs and values and on our environment, we create a mental context that allows us to feel more or less in control of our lives. Our mental state becomes a product of habit. We tend to have the same reaction to similar circumstances. And while we tend to spend a lot of time thinking about and noticing our external circumstances, we tend to pay little or no attention to our internal context. Our thoughts and our feelings often go on automatic. We rarely decide to “have a good day” regardless of the coming snowstorm and the dreaded month-end business review. On the contrary, we tend to anticipate and justify our bad moods based on the external context.

Just as with our external environment, our mental context is a major factor in the results we get. And just as with our external circumstances, our internal state can have “broken windows.” From childhood trauma and bad experiences, to poor habits and wrong choices, we carry with us the luggage of our inner circumstances. And just as with the broken windows theory in criminology, we are exquisitely sensitive to minor changes in our internal context. Without noticing, we can be affected by a smell, a tune on the radio, or an old poster. An odd thought could pop up during a meeting at the office, and then we find ourselves drifting for fifteen minutes and missing important information. A full moon could trigger a sleepless night, which we try to correct the next day with extra coffee. These are all small sensory-triggered changes in our mental context that can end up having a big impact on our day. However, there is another class of inner context factors that are even more powerful in determining the kind of life we are going to have. These factors are our prevailing thoughts, beliefs, and values. This is what we tell ourselves on a daily basis, and what we tell ourselves in situations that matter. And what we tell ourselves sometimes comes from a single moment. One point in time can define our lives.

For Amy Cuddy, that defining moment came when at age nineteen she was in a bad car crash. It landed her in the hospital. When she woke up, she had a severe head injury, and as a result she had been withdrawn from college. Her IQ had dropped significantly. Because she identified as being very smart, Amy was devastated. When you are called “gifted” as a child and then you can’t even graduate from college, it’s a real struggle. I can’t imagine how a life-changing event like that would affect someone’s mental state. What do you tell yourself when your core identity is taken away from you?

After years of hard work and getting a couple of lucky breaks, Amy managed to graduate from college. It took her four years longer than her peers. When she landed a job in academia, Amy had a mental context of “I don’t belong here.” Years of struggle and hard work without hope had created a complete lack of confidence. This mental frame was so strong that Amy had a recurring fear she would be exposed as a fraud and thrown out. During her first year working at Princeton, she needed to give a talk to a group of her peers. The night before the talk, she called her boss and told her she was quitting. Her mental context was in such a dire conflict with reality that she chose the basic flight response. Instead of going through with her assignment, she was ready to escape. Her boss convinced her to stay. “No, you are not quitting. If you feel you don’t belong, you will go in and fake it!” her boss told her. With words to that effect, she successfully addressed Amy’s mental context. If you feel like a fraud, then fake it. Accept yourself for who you believe you are and go do your job.

The ability to accept ourselves for who we believe we are is one of those major mental context factors that have the power to shape our lives. Some people are good at it. Others struggle. For most of us it starts at school. As we mature, we find a certain weirdness about ourselves that we prefer to keep private. Over time this becomes a habit, and then it becomes so automatic that we don’t even think about it anymore. At school we learn to use social conventions to hide. We accept we are band geeks, or jocks, or bookworms, or outcasts. We know that these labels only define a small portion of who we are. But we use them as a camouflage, a protective mechanism. As we enter adulthood we might outgrow this, or we become too comfortable with the protection of the social label. So much so that we start to believe it. We tell ourselves stories that support this label. “Not bad for a band geek, but did I really deserve this promotion?” Talk about self-sabotaging mental context.

This is what happened with Amy Cuddy as well. She got so used to telling herself that she had a lower IQ that she failed to see how she had come back and earned her spot in academia. She was a smart kid again, but she didn’t notice it. Or she noticed it, but she didn’t believe it. Her mindset needed an adjustment. She needed to change her story from “I am not supposed to be here!” to “I belong here!” This was one of the big broken windows in her mental framework. This space in her inner context was covered with graffiti—top to bottom, inside and out. The graffiti of the impostor syndrome dominated her. The story of when and how she wiped these graffiti clean probably deserves a separate book. But one day Amy Cuddy realized she had changed her inner context.

It was years later during her first year teaching at Harvard. One of her students, who had not participated in class the whole year, came to Amy and told her, “I am not supposed to be here!”

At that moment Amy had an epiphany. She realized two things. First, it was “Oh, my gosh—I don’t feel like that anymore!” She knew exactly what the student was talking about, and she was no longer under the spell of this broken window. The second thing she realized was, she knew exactly how to help her student.

“Yes, you are supposed to be here. And, tomorrow, you are going to fake it! You will go into the classroom and you will make the best comment ever.”

Buy The Excellence Habit On Amazon