You are here: Home / Fiction / Romance / The Enchantment of the Fairies: Blue by Jeanne Baptiste 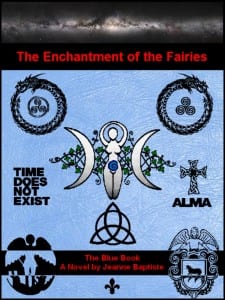 Jana is the daughter of the Prince of Moravia; she lives in a castle with her parents, her dog and with many servants. Her grandmother is a sorceress, who knows how to cast spells and prepare potions to cure all kind of diseases, but who is also a clairvoyant with the gift of prophesy, able to see the past, the present and the future.

Since very young Jana learns to love magic by listening to her grandmother’s stories and she has even learned a few spells while witnessing her grandmother performing her rituals for every season of the year. Unfortunately for Jana, her grandmother passes away while she is only 8 years old, leaving her with more questions than answers.

Jana wants to know more, she is in a quest for magic, a quest that will bring her to faraway places she never imagined, but luck is on her side and destiny will take her to the places where she needs to go, and to meet the people that will guide her to reach her goal. However it will not be easy and Jana shall find many pains and difficulties along the way, because life is not a fairy tale and even if it was, not all the fairy tales have a happy ending.

When Jana becomes 9 years old, she is sent by her parents to Aachen, the capital of the Holly Roman Empire, there her adventure begins. At this place she will discover more about the enigmatic religion of her grandmother, but she will also learn about life, love and destiny. She will learn that magic is all around us, hidden from normal eyes to see, however magic is with us all the time, magic is real.

[The Enchantment of the Fairies Series]

Fate and reincarnation were two common concepts in the ancient world; cultures such as Celts, Greeks and Hindus based their religions entirely around these believes. Fate is defined as a predetermined course of events; a predetermined future, it is the concept that there is a fixed natural order to the cosmos where nothing happens by chance. Meanwhile, reincarnation is the concept that after our biological death our soul begins a new life in a new body and it keeps returning to this world an infinite number of times.

The Enchantment of the Fairies is a fantasy Series that explores these two interesting concepts in the context of a beautiful and fascinating tale: the romantic story of Jana and Philipp. The main events take place in the European city of Aachen, heart of the Empire of Charlemagne, at a time when the ancient religions are in transition of being replaced by Christianity, the story presents the struggle and reconciliation of the old traditions trying to survive while they are in the process of being destroyed or absorbed into the new faith.

The story consists of two books named Red and Blue respectively. Red is the story told by the perspective of the boy while Blue is that same story retold by the perspective of the girl. The two stories blend perfectly and seamlessly, the reader may chose to read the books in any order he chooses, each book is a complete story on its own. Each book follows the life of its main character from childhood to adulthood presenting a breathtaking view of their dreams, aspirations and the main events that shaped their lives and personalities.

Despite the name, the book is certainly not a children’s fairytale, it targets young adults, but the lovable story appeals to everyone to enjoy, it is a mix of adventure and romance with a background of Magic and Mysticism

How is Writing In Your Genre Different from Others?
People use to say that a story depends on the person who tells the story, most books focus on the main character of the book, so I decided to be different and tell the same story twice, but from two different perspectives, from the views of the two main characters.
One is a christian boy, the typical hero of a story fighting for love, honor and glory, the other a pagan girl in a quest for magic and mysticism, their views of the world are completely different, they have separate lives. and different backgrounds, however their stories converge and blend at certain moments in time, influencing each other lives and changing their lives forever.

What Advice Would You Give Aspiring Writers?
Write with your hear, put yourself deep in the role of your character and try to imagine each character of the book as a real person with feeling, aspirations and their own story to tell.

Author Bio:
Jeanne Baptiste is a popular writer of Historical Romantic Novels for young audiences. She is a graduated of Economics and European Law, but with the heart of a writer and the soul of a traveler who cannot stay for long in the same place.

Her work is based in the Capital of Europe, Brussels, but she is constantly on the move, traveling around the world, exploring, learning and writing.

Native from Czech Republic, Jeanne left her country at a young age, being educated in several countries including France, Belgium and Germany. During her childhood, Jeanne witnessed the end of the communist regime in her country, an event that has influenced and shaped a big part of her world views, her love for self-determination and the freedom of speech.

Jeanne is author of several books and poems including the popular series: The Enchantment of the Fairies. A set of fantasy books exploring the old religions of Europe in the pre-Christian Era, the series is a mix of historical romance and magical fantasy.

What Inspired You to Write Your Book?
An old love, the traditions I’ve learned from my Grand Mother and resent events of my life.