You are here: Home / Fiction / Paranormal / The Dreamwalker by Constance Williams and Lillian Bishop 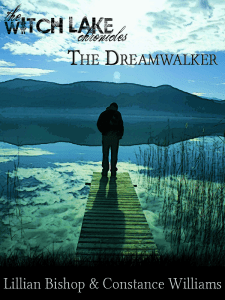 Everyone loves a good mystery – and Sam Gardener is certainly one of those. Abruptly pulled from school years before, nobody has seen or heard from him since – until now. Returning to high school for his senior year, he is not the same friendly boy his classmates remember, and the rumors are flying. None, however, come close to the truth. The bearer of a strange and frightening supernatural ability, Sam strives to regain control of his life.
Along with some unlikely new friends with secrets of their own, Sam learns that his own mystery is only the tip of the iceberg in the quaint town of Witch Lake. With their help, he must learn the strength of his own gift, and lose the fear that comes with it. With their help, he can stand against the gathering darkness. Together, they can face the truth of Witch Lake, but alone? They will be lost beneath the surface, drowning in depths none could foresee.

“Definitely a book I’d recommend to any YA, supernatural, or paranormal fan.”

“The idea behind this story is fascinating, and had my imagination spinning…”

“There are very few books that I’d consider to be compulsive reading, but this certainly was one for me.”

“I would recommend this to teens and adults alike.”

“You’re pulled along with the story from the start right up to the very surprising end.”

“This plot is simply fantastic”

What Inspired You to Write Your Book?
My co-author (Lillian Bishop) wanted to create a world where amazing and impossible events occurred – but where the vagaries and realities of living in the modern day weren’t completely ignored and pushed aside simply because the existence of, say, mobile phones and a decent and intelligent police service didn’t fit with the underground existence of werewolves and ghosts.

How Did You Come up With Your Characters?
Most of the time, our characters came up with themselves!

Book Sample
A hush fell over the crowd of students as Sam Gardener climbed the steps of Witch Lake High. He glanced up at the curve of the arch as he passed through the main doors, ignoring the way that people still turned towards him to stare. He had known most of these people since they were little, small towns worked like that. Yet they treated him like the new kid in town. Guys he had known since they played in the kindergarten sandbox hardly recognized him these days – and Sam didn’t go out of his way to correct that either.

He didn’t want to be here. A resident of Witch Lake since birth, Sam was attending the high school for the first time for his senior year. He had been home schooled for the last few years – ever since his mom had pulled him out of junior high half way through his first year there. That had been the year everything had gone sideways in his life. It started with his parents splitting up and next he was pulled from school. His mother then had to fight to keep them from pinning some sort of ‘crazy’ label on him – and it was all because of the dreams.

Sam shouldered his bag, hunched his shoulders and headed into the building. Making a direct line for his locker, he kept his eyes to the ground. He had a reputation as a loner now, always on his own, barely speaking in more than grunts to anyone who dared approach him. The rumours had started flying the moment he’d re-entered mainstream schooling, after he’d near enough disappeared halfway through a semester all those years ago. What had happened to Sam Gardener anyway? Drugs, some said. That was always stock-in-trade, even though they weren’t all that easy to come by in Witch Lake. Especially not for a twelve year old. Horrific accident, others said. Usually it was the guys – they’d seen what was hidden under his clothes in gym class, after all. The scars – there was no ignoring the scars. Most of them, at least, were hidden away under the long sleeves and long pants he wore, even on the warmest of days. The only scar that wasn’t so easily hidden was the fine crescent by his left eye, and that he dealt with by growing his hair long enough that it loosely curled across his face. But still, that first day in gym class was all it took. Communal showers, and the rumours had started to spread.

His dad had beaten him half to death – that was the theory one girl, Haley Chapman, had. She said her mom had been told by Stacey at the salon that Dan Gardener, Sam’s father, had left town not long after Sam had been pulled from school. Haley had told her friends that Dan had been sending death threats and stalking Sam and his mom for years, and that was why May Gardener had never let her son go back to school. She was too scared that Dan would snatch Sam right from outside the front gates. Only now, Dan had been caught by the police over in Texas and he was in some maximum security prison or something.

Haley had spun a good story – it was just a pity it wasn’t true.

Sam had been withdrawn from school because he had sleeping problems. Or, rather, he had exhaustion problems. He’d go to sleep at night, but when he woke up the next day, he’d had disturbing dreams and was more tired than the night before. At first, his parents thought he was just playing it up. Then came the doctors, and the tests, and the sleep studies in the city. For his parents, the worry and the bills and the spiralling costs that were accompanied by the tension and the arguments eventually led to breakdown of their marriage.

For Sam, it all became a blur. A series of moments. First the world went away. Normal life became a thing of the past as exhaustion took over his life, but Sam quickly learned to wish that that was all there was to it.

“Sam Gardener?” The question nudged Sam out of his thoughts and he looked around to see a pair of sharp blue eyes staring at him through thick, dark rimmed glasses. He dropped his eyes immediately, which was a move born more from habit than actual thought. He tended to avoid eye contact, avoid taking in the little details that seemed to flood his brain regardless.

“Yeah?” he suggested, staring at the floor towards her feet. The floor, at least, was safe. He had dreamed about this school so many times, even before he’d ever set foot in the place. His first day here and he’d been able to navigate around it no problems. There were some advantages. Just not very many. He had been against a return to school, but his mom had insisted. He slept now, most of the time. She wanted him to have a taste of a normal life once again.

“The guidance counsellor wants to see you,” she told him, handing him a slip of paper. She hesitated a moment, as though she was going to say something else, or as though she was checking him out. When he remained unmoving, head down, dark curly hair falling over his eyes as he resolutely looked at the floor, she sighed, and turning, disappeared into the crowds of students as the bell rang.

Sam waited until the corridor was clear before he looked at the paper he held in his hand. Guidance Counselor, first thing. Of course – the woman always wanted to see him. He supposed that he was an ‘interesting’ case. Something out of the ordinary. His mom had been to the school earlier in the week, to meet with the counselor. Sam rolled his eyes. His mom – she had been great and all since things started going crazy, but there were times when she just tried too hard. Of course, he knew that the reason he was still here was because of her.

She had believed him when nobody else would.

He opened his locker and stuffed his books inside, haphazardly, as the second bell went. He’d collect them later, when he actually had to go to class. Last time he’d had a meeting with the guidance counselor, it had taken half the morning. Later that night he’d dreamed about her.

About the Author:
Lillian Bishop and Constance Williams have been writing together for over ten years now. Until now, their audience has been friends and family, and their writing has been purely for pleasure. They both believe that that is what is should be about – after all, if you don’t enjoy writing, how can you expect anyone to enjoy reading what you have written.

Unusually, Lillian and Constance do not live near each other. In fact, they live in entirely different countries. Lillian is American, Constance is British. Their writing partnership began when they were introduced through a mutual friend, and they discovered that they shared a love of the written word, a passion for crafting stories, and a compatible style. Now they are mostly found online – at very odd times of the day and night!

Links to Purchase eBooks
Link To Buy The Dreamwalker On Amazon