You are here: Home / *Reading Room / Buyer's Guides / The Devolution of Adam and Eve (TIO Book 2) by Mit Sandru 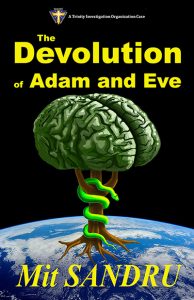 We are smart because Adam and Eve ate the Forbidden Fruit. But the Forbidden Fruit can make us dumb again, and the whole humanity could degenerate back into apes.
A pandemic causes billions of people to lose their minds. The world’s government health agencies cannot identify the pathogen and develop an antidote. It comes from another realm, and only Claire, Prescott, and Travis can solve this enigma. Will they prevent the end of humanity before it’s too late?

What Inspired You to Write Your Book?
How viruses can mutate our minds.

How Did You Come up With Your Characters?
Claire, Travis and Prescott are part of the Capuchin Trinity Team, an investigating unit specializing in paranormal and supernatural crimes that science and law enforcement cannot solve.

Book Sample
On a peaceful morning in Southern California, Prescott, Claire, and Travis, dressed in dark gray buttoned-up suits and wearing wraparound shades, stood and observed the well-manicured grounds of the Queen of Heaven Cemetery. They had been asked by Maximus to meet at a particular gravesite. The bronze memorial plaque on the ground read:
RIP
Derek Dodd
2017 – 2062
“Who’s he?” Prescott, the shorter of the two men, wondered aloud.
“Either a saint or a villain,” said Travis. “I put my money on the villain.”
“We’ll find out soon,” said Claire, as she initiated the holo-conference with Maximus.
The holo-conference was held in each of their Personal Audio-Visual (PAV) virtual visors, a device that resembled dark wraparound glasses when activated.
“Thank you for being here.” Maximus appeared in the hologram as a bald Caucasian man with dark glasses, but in fact, Maximus was an Artificial Intelligence (AI) entity and the head of Trinity Investigation Organization (TIO.) “We have a new investigation requested of us. Fresh intelligence has surfaced of a new biochemical weapon available on the black market. This weapon seems to affect the nervous system, specifically the brain, but without killing or physically incapacitating the victim.”
“What mad scientist could have ever developed such a biochemical weapon?” Dr. Stark, another virtual participant, appeared in their PAVs. He was the chief scientist at TIO, a skinny, weathered man who resembled a pale mummy.
“It is unclear what this weapon is, or who developed it, or where,” Maximus said.
“Has this biochemical agent been analyzed? Are there any countermeasures against it?” Claire asked.
“Negative,” replied Maximus. “Only the aftereffects have been discovered recently, prior to it being offered for sale.”
“So it has been used against people already?” Prescott asked.
“Yes. The intelligence community heard a rumor that this biochemical weapon was recently sold to warlords in the Middle East.”
“Why are we involved?” Travis asked. “Chemical or biological weapons are not our specialty.”
“For one reason,” said Maximus. “The arms dealer who allegedly sold this agent is dead, and there is no information on to whom he sold it. The buyer may have killed him after the transaction was complete.”
“That’s why you asked the three of us to gather here at his gravesite,” said Travis, looking down at the memorial plaque.
“Derek Dodd was that dealer, now dead and buried,” said Maximus.
“And what are Prescott, Claire, and Travis supposed to do—exhume him?” Dr. Stark asked. “A dead man tells no tales.”
“We have ways to make the dead talk,” said Travis, raising one eyebrow at the doctor’s hologram.
“Oh yes, your hocus-pocus,” Dr. Stark smirked. “Why am I here, then?”
“Your expertise is required to identify the biochemical agent,” said Maximus. “When it’s found.”
“What are you three going to do, sink into the grave to have a chat with the deceased?” Dr. Stark wisecracked.
“Surprise, surprise—Dr. Stark has a sense of humor.” Claire chuckled. “No, this does not involve getting our hands dirty.”
“In that case, get to work,” said Dr. Stark. “Don’t keep the dead waiting.”
“Stand by, it won’t take more than a second.” Claire, Prescott, and Travis joined hands and closed their eyes.

For joining the author’s email/newsletter list you will get:
Free eBook for signing up to my e-mail list