You are here: Home / Fiction / Romance / The Debutante Bride by Wendy May Andrews 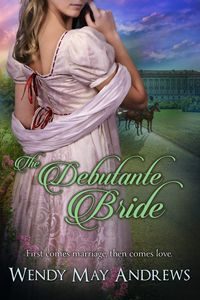 Miss Elizabeth Dunseith, Beth to her friends, grew up in genteel poverty, happy despite her abusive father and weak mother. When her father sells her to the highest bidder in order to pay off his gambling debts, she fears what her future will hold but is relieved to get away from home with her new, handsome husband.

Lord Justin Fulton, Earl of Westfield, is confused by the contradictory behavior of his purchased bride. One moment she is haughty and cool, the next she is warm and endearing. When his sister refuses to help establish his new bride in Society, Justin turns to a friend’s wife to show Beth the best way to navigate the politics of the ton.

Their growing attraction just seems to confuse matters even further. Will these two be able to see past their differences to make it to happily ever after?

Targeted Age Group:: It is suitable for any age but targeted to adults.

What Inspired You to Write Your Book?
My tagline is First comes marriage, then comes love. I was inspired by imagining what would happen if these two were “forced” into a marriage and had to figure out how to achieve their happy ending. There was also a complicated situation within my family that writing parts of this book where very cathartic for 😉

How Did You Come up With Your Characters?
Beth was named after one of my best friends when I was growing up but doesn’t really take after her very much. She is a product of her imaginary environment! The situation I made up for her backstory made her who she is. And Justin is the perfect beta hero. I usually prefer alpha heros but Justin was so much fun to write. For much of the book he is just a little bit oblivious but he makes up for it very well in the end.

Book Sample
As she came to wakefulness, Beth held herself very still, momentarily surprised to find herself in a strange bed, but then it all rushed back into her consciousness. She was a married lady. A countess at that. And she had only met her husband thirty-six hours before.

The thrill of freedom flowed through her as she reminded herself once more that she would never again have to return to the house she grew up in unless she so chose. Of course, she would want to see her mother again, but she allowed herself to bask in the contentment she was experiencing. She wiggled her toes and stretched her arms, reveling in the new sensation.

The unknown factor of her new husband was obviously of concern, but so far he had been remarkably even tempered. She would even go so far as to describe him as kind, at least what she had seen of him in their short acquaintance. Beth could not decide how she felt about how handsome he was. He was deliciously attractive, but she was unsure if that could be trusted. No doubt other women would find it to be a point in his favor.

Interview with Author – Wendy May Andrews