You are here: Home / Fiction / Women's Fiction / The Daughter-in-law Syndrome by Stevie Turner 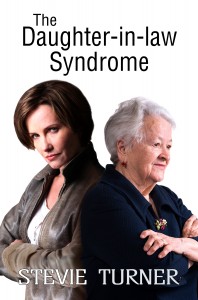 The Daughter-in-law Syndrome investigates the complicated relationship which is causing much friction between grandmother Edna Deane and her daughter-in-law Arla. In addition it focuses on the sometimes tumultuous partnership between Arla and her husband Ric.

Arla Deane sometimes likens her marriage to undergoing daily psychological warfare. Husband Ric will never voice an opinion, and puts his mother Edna up high on a pedestal. Arla is sick of feeling that she comes in at only second best to her mother-in-law, who much to Arla’s fury is never told anything by Ric or his two sisters that she would not want to hear. After 28 years of marriage, Arla is at the end of her tether, and persuades a reluctant Ric to accompany her for marriage guidance. As they look back over their lives with counsellor Toni Beecher, Arla slowly comes to realise her own failings, and the reason why Ric will never utter a cross word to his mother.

Also adding to Arla’s stress is the fact that her son Stuart will soon be marrying Ria, a girl Arla feels is just looking for a free ride. Arla is convinced that Ria will be no asset to Stuart at all….

What Inspired You to Write Your Book?
35 years of being a daughter-in-law myself, and listening to tales of horror over the years from other daughters-in-law.

How Did You Come up With Your Characters?
The characters are made up, but some of their personality traits are taken from people I’ve known in real life or from stories I’ve heard from others.

Book Sample
CHAPTER 1
“How long have the two of you been married?”
Arla’s nose was irritated by a pungent aroma emanating from two smoking joss sticks perched in a plant pot at a rakish angle. She sniffed and looked up from the carpet with its many dog hairs towards the friendly smile worn by Antoinette Beecher, and waited for her husband Ric to say something; anything. However, Ric was remaining as silent as the proverbial tomb.
“Twenty eight years, and we’d known each other a year before the wedding.” Arla nodded towards Ric to confirm her statement.
“And has the marriage been generally happy up until now?” Toni Beecher wondered if pulling teeth would be easier than trying to make this couple open up.
“We’ve had our ups and downs, as does anyone, but now I’ve finally decided that we can’t go on like we have been, and that something needs to change.”
“Something?” Toni asked.
“Well….er… someone more like.” Arla replied and looked at Ric, confident in the knowledge that the ‘someone’ was not going to be herself.
***
Toni briefly wondered if the morose man sitting opposite her and trying to shut out the world, was in fact mute.
“What would you both like to get out of these sessions?”
Arla thought carefully before replying.
“Perhaps you can get out of Ric why he’ll never voice an opinion on any subject, and why he’ll never tell his mother anything that she doesn’t want to hear.”
“And you, Mr Deane? What are you looking for here?” Toni smiled as pleasantly as she could, and strived for eye contact.
Concentrating her gaze on the tassels fringing the moth-eaten rug under the coffee table, and with a growing disappointment at her husband’s continuing silence, Arla then looked up and let her eyes stray about the room towards the counsellor’s overflowing bookshelves, trying to catch a glimpse of their obscure titles. When her eyes did focus on a book’s spine, she realised that the wording on it made absolutely no sense to her whatsoever.
***
“So…..what problems have brought you both to see me today?” Toni changed the subject and again tried for eye contact from either one, but gave up.
“There aren’t any problems as far as I’m concerned.” Ric cleared his throat and shifted about uneasily on the sofa. “I’m fine; life goes on as always, doesn’t it? It was Arla who suggested we do this; I’m not really sure what the problem is.”
“Only because you can’t see what’s going on right in front of your nose.” Arla looked at her husband and nervously twisted her wedding ring around with the forefinger and thumb of her right hand.
“Mrs Deane, would you care to elaborate a little bit please?” Toni was relieved to have heard Ric Deane’s deep, resonant voice.
Arla was soothed by the seemingly young-looking counsellor’s velveteen voice and unfaltering smile. Strands of dark fringe touched her eyes, and she pushed them away impatiently.
“As I said before, it’s his bloody mother. For years I’ve put up with it, but no more. He doesn’t want to admit there’s a problem. The woman is slowly but surely ruining us.” Arla wiped away a stray tear and sighed.

Buy The Daughter-in-law Syndrome On Amazon