You are here: Home / Fiction / THE DARK INTRUDER, The First Book by EMMA N. IBEGBULEM 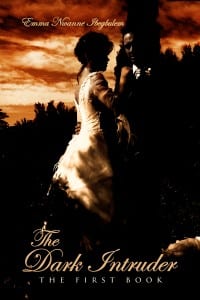 Our imagination is caught most, gets fired the most, and even gets further worked upon by “the Unfamiliar”.

This is what happens to Victoria Villanova when she encounters the dark stranger, Enrico Maria De Martis in THE DARK INTRUDER, the first book of what will be a series of two books. It bears the message that a stranger could come into your life and steal your heart away.

A stranger. Who is he? What is he doing in her house, Villa Dorothea, the microcosm where the main part of the story evolves? Set in Italy in 1853, this is a character driven, historical romance fiction crafted, engaging 104,000 words (452 pages). It evokes the mystery of language and commands an era marked by rebellion, plots, treachery and threat. Even so, love, upon which the story weave lies, is inextricably meshed into the tangles of the 19th century Italian resurgence, the Risorgimento, against a backdrop of the picturesque Roman Castles in the Italian version of the Victorian era.

Victoria Villanova is an intelligent woman, who once moved in high circles, and with her ability to introspect and reflect on things within and without, she’s able to take the reader on a journey from steamships to steam locomotives, fraught with danger, bound for a home she barely knows. With a discerning mind, she shows the reader who the dark-eyed devil truly is, or so she thought, and then shamelessly admits her misjudgement of him, resigns to love him long before discovering his real identity and his purpose in Villa Dorothea; the estate that no longer belongs to her family. She discovers nothing is left of her family; not even her father. And Enrico Maria De Martis, what is left of him?

THE DARK INTRUDER is deeply rooted in time and love; most importantly, love and all of its various implications. It commands an era marked by revolutions, plots, treachery and threat, and even so, this love, upon which the story weave lies, inextricably meshes into these nineteenth-century tangles of what may be referred to as the Italian version of the Victorian era.

Although the main theme is love, the augmentation of other nineteenth century Italian social concepts and conventions leads us, through Victoria Villanova, a pronounced character with a clearly defined ideological profile, to recognize that true love and that the climactic events of romance could come from someone we least expect or trust.

How is Writing In Your Genre Different from Others?
Like many books, THE DARK INTRUDER is a theme of love with its many complexities versus emotional wrestle within and political struggle without. Victoria’s inability to let herself go at first shows how, sometimes, we render ourselves vulnerable when we are short of a rational state of mind. In fact, for as long as she continues to dwell on her emotional and economic shortcomings, she builds a wall of hostility between her and the man of her dreams. These themes of love and war affect every us all one way or another. It is an aspect of life that relates to the very core of what we feel and through these two themes we can all begin to question our judgments and question ourselves a little more, and on the whole review what we believe love to be.
THE DARK INTRUDER is the story of a young woman, born in the nineteenth century, living in a society driven by the hands of men:

Therefore, the only prospect left to a woman was to
remain dependent on a man; first as a daughter and then as
a wife. And did this woman become dependent because she
day-dreamed? No! She sought independence in fantasy.

Once married, it was extremely unacceptable for her
to disregard her matrimonial obligations, and a divorce
was out of the question. Thus, if the only door open to her
that gave her escape and solace was to day dream, then why
shouldn’t she? (pg. 394, para. 3-4)

Nevertheless, whether a woman had lived in the nineteenth century or lives in the twenty-first century does not mean her desire to rebel against repression and fight for emancipation is different, and neither are her womanly feelings. She’s merely conditioned by factors surrounding her, depriving her from being who she really wants to be. She’s forced to alter some aspects in her personality in order to adapt. Just like Victoria Villanova, many women today still don’t have a say in their lives, and providing for themselves could be pretty challenging as women can hardly gain livelihood of sufficient importance and remuneration, just like Victoria two centuries ago. And as these women nurture similar hopes to fight their secret battle one day in the open, they do not lose their natural ability and desire to love, and love even that domineering male.

Academic works abound on the history of the Italian Risorgimento, little or no literary work has been published on the subject in English language. In an attempt to bring Italian history to the rest of the world, shifting my Main Character one mood to another, I’m able to bring this part of the Italian history to life, attributing an evocative meaning to the narrative that would otherwise be a mere chronicle of historical events about 18th Italian politics.

What Advice Would You Give Aspiring Writers?
Not to rush a book. take all the time needed to research, write and write until they acquire a voice of their own; a pronounced voice, unique and evocative. Learn to show and not just tell.
As for publishing and book sales; determination is the key!

Author Bio:
Born Nigerian, Emma Nwanne Ibegbulem lives in Rome. She teaches English as a Second language at a language school in the Italian capital. She studied fine arts and loves painting as much as she loves writing romance fiction. She discovered her talent for writing, after she had begun painting, when she was about eleven. She wrote several short stories for children her age, and younger. They were never published. Then a significant change in her life occurred when she started reading romance fiction. This genre drew out the passion in her, gave her inspiration, and propelled her into expressing what she feels not only in colours, but also in words. She wrote her first full romance fiction at the age of eighteen. It was never published.

Why Historical Romance?
“The eighteenth and nineteenth centuries are like plain, white canvases for me. They provide settings in which all the possible colours in the romantic colour wheel can be used to paint passion with words. It is an era when passion was at its highest … when love was true, and true love could be shared after having conquered thousands of obstacles. This is what keeps the fire burning.”

Emma N. Ibegbulem is able to express romance in this period since, for her, it is dreamlike. A lot about this period is romantic, according to this young romance writer.

Emma N. Ibegbulem started writing the Dark Intruder in late 1999, shortly after her arrival in Rome, and her discovery of the enchanting Castelli Romani. The Dark Intruder reflects a yearning for the unknown, that force that draws us towards things new and curious and the fact that encounters with the unknown are vital and thrilling.

From her emotionally curious nature, she has been able to create an atmosphere nourished by emotions accumulated in a new world, Rome. By origin and upbringing, the uniquely inward passion, which cannot be explained in words alone, reflects in her daily life. Her artistic gift, the role that has nurtured her all her life, has made of her the sensitive, and more pertinently, the passionate creator of romantic ideals as they have been handed down to her by nature.

“I consider myself an emotional wanderer—a young writer growing up, seeking wholeness in love, and expressing this wholeness in words and colours.”

What Inspired You to Write Your Book?
The nineteenth century, in particular, is like plain white canvas for me. It provides setting in which all the possible colours in the romantic colour wheel can be used to paint passion with words. It is an era when romance was at its highest, when love was true, and true love could be shared after having conquered thousands of obstacles. This is what keeps the creative flames burning in me. I was inspired to write The Dark Intruder by the scores of enchanting historical events and personalities that marked Italy then. A lot about the period is romantic; there was time, there was poetry, there was nature, there was sorrow, there was pain . . . and all these set the scene for the perfect romance.”