You are here: Home / Fiction / Mystery/Suspense / The Curious Prophecy of Birds by Amanda Darcy @darcyphotos 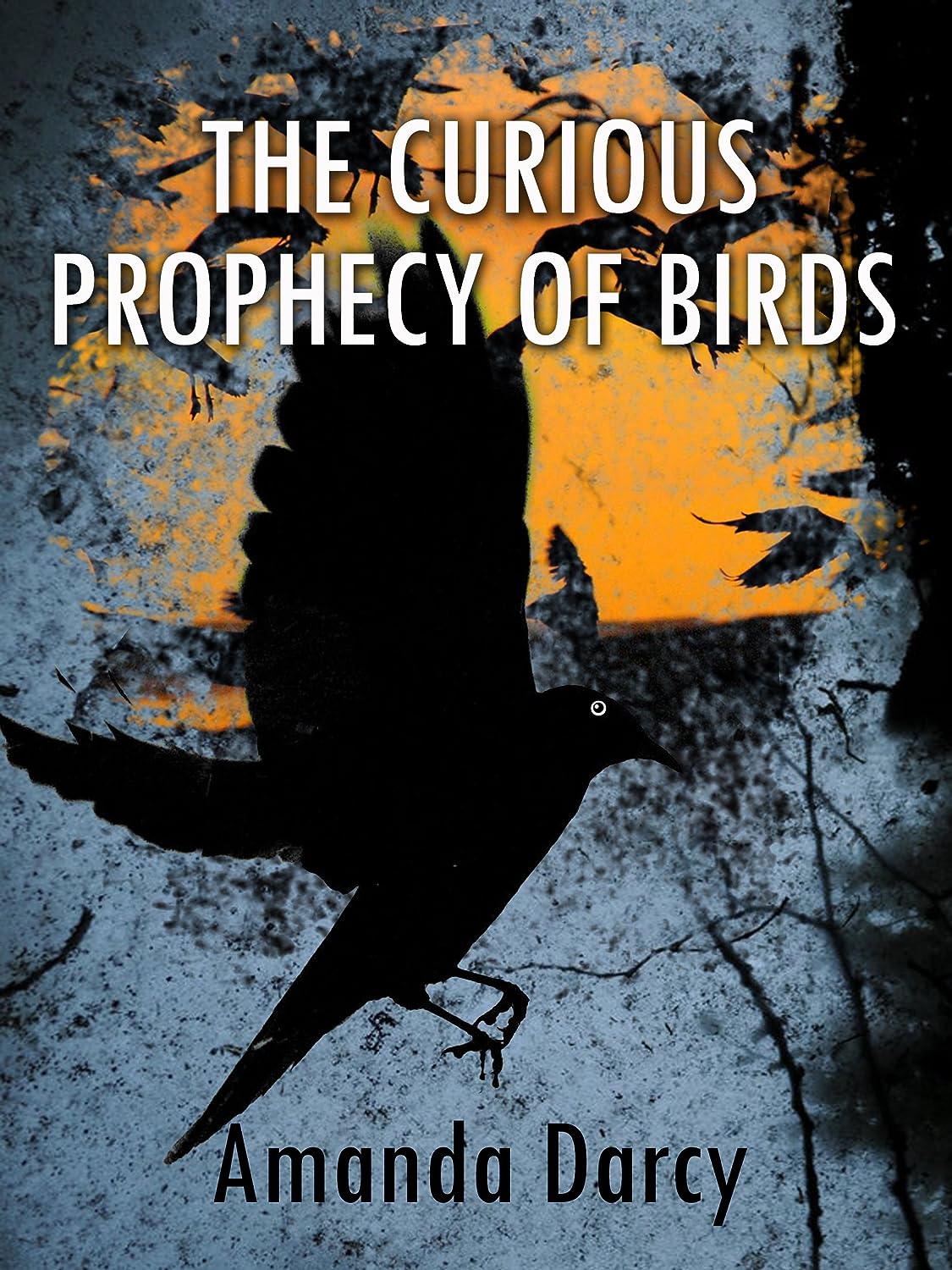 The Curious Prophecy of Birds
Synopsis

Six months ago
Robbie, an experienced climber falls to his death on a remote climb. His climbing partner, Kate Simmonds, tries to drag his body back to civilisation but finally has to leave him to the vultures.

Eighteen years ago
A young mountaineer cuts the rope of a fallen colleague, sending him to certain death over the edge of a crevasse.

Twenty years ago
A university professor discovers sinister symbols engraved into the rocks on a remote Scottish island. They tell of a barbaric past, the “Old Ways”.

Present day
A huge flock of birds arrives on the tiny Scottish island of Faull. The flock is made up of many species and is previously unknown to science, but not entirely unknown to the islanders. They are harbingers of fear, murder and revenge.

Kate and Nick, the main characters, are thrown together on the island of Faull. Kate, an ornithologist, has come to study the birds, whilst Nick has been sent by his university professor, to confirm the meaning of the strange rock symbols and to discover if, as the professor feared, the Old Ways are being resurrected.

They first meet in a Land Rover, in a cross country drive across the island which results in a near fatal crash. Kate, the only experienced climber amongst the passengers, is forced to execute a treacherous climb during a rising storm, without ropes or any proper gear, to get help for the trapped driver. Close to hypothermia and faced with a swollen river to cross, she is rescued by Jock, a crofter and one of the elders of the island.

When they return to the stranded vehicle several days later, Kate discovers that Nick is also a climber – he lied and he could have gone for help instead of her. He claims he has not climbed for many years.

The birds are a constant presence throughout the story. They appear at first to be benign, mysterious and ethereal, but they harbour sinister intentions. The islanders believe that birds carry the souls of the dead who cannot yet leave earth. They carry the souls until they are avenged.

As Kate and Nick continue their research Nick discovers a number of symbols, engraved into the rock face above the Eastern sea cliffs. Together, he and Kate find that the cave beneath the cliff is entirely covered with similar symbols.

They hire a boat to investigate the cave, but the islander who hired the boat to them has lied about the tides. Trapped in a sea cave with a rising tide and a fierce current making escape by sea impossible, the only way they can go is up. Kate climbs the cave walls and discovers the remains of an ancient staircase. As they follow it, the water rises at a ferocious pace, threatening to overwhelm them just as they see daylight.

As they recover from the ordeal it become obvious to Nick and Kate that the stakes have been raised – at least one of the islanders wants them dead.

In need of more information, Nick returns to his university library to obtain further evidence from the ancient books that are kept there. Whilst he searches the library stacks he encounters the sinister librarian, George, and begins to pick up a strange scent – smoke mingled with stagnant water. The library is on fire. George tries to lure him into the flames. Nick escapes. George’s body is never found.

Whilst Nick recovers in hospital he is visited by Shona, Jock’s daughter, who tells him the secrets of the island and what is about to happen. She tells him of the legend of the thousand winds that will blow and which will signify the beginning of the horror that is about to return to Faull – she just cannot say when – Nick must work that out for himself.

Nick returns to Faull and tells Kate about Shona’s story. Kate agrees to stay one more day to give Nick a chance to discover when the islanders plan to resurrect their ancient rituals.
As Nick pores over his research Jock burst in, shotgun in hand. One of the islanders has instructed him to kill them. He allows them to escape, telling them to hide in his cottage.

As they hide there they try to call the coastguard to summon help on Jock’s old two-way radio. A freak storm springs up and topples the transmitter. The thousand winds that Shona had predicted have started. Help is not coming and they watch in horror as every inhabitant of Faull gathers in a macabre ceremony at the edge of the eastern sea cliffs. Unable to defeat the numbers of islanders present all they can do is watch. When it becomes clear that lives are in danger Nick dives forward, hoping to at least let the intended victim escape. Two people fall from the cliff and Nick is engulfed in a roar of flame from the fire.

One week later, as Nick is recovering, Kate recounts the horror of what happened that night, and more importantly, that their nightmare is not over.

In the final chapters Kate and Nick struggle to recover the ancient books of the cult in order to destroy them and end the Old Ways forever. They must execute a dangerous climb on a treacherous sea stack to reach the last known hiding place of the books.
Just before they set out on the climb Kate makes a discovery that Nick is linked to her family in a way she could never have known. She realises the terrible mistake she has made and there is only one way she can put it right.

Kate and Nick climb the sea stack but as they start their descent the flock of birds intervenes – to avenge the soul of a dead climber.
According to local folklore, once the soul has been avenged the flock should leave, but it does not. There are more souls that must be carried and more gruesome discoveries to be made.

What Inspired You to Write Your Book?
The title of the book is also the title of a series of fine art photographs that I have been working on for a number of years and which can be seen on my photographic website www.amandadarcy.co.uk. But I must emphasise the book is not just about birds! The birds are woven into the history and superstitions of the characters and the island on which they are sighted, just as they are in so many cultures. I wanted to write a fast-paced thriller/mystery which is about how the past and future are inextricably linked and how lives can be changed by seemingly insignificant coincidences.

How Did You Come up With Your Characters?
I started with a blank page in a notebook for each of the main characters, gave them a name, age and some physical characteristics – all completely fictitious. I added a brief bio for each – literally a few lines – and then I began writing the novel.

I think it is possible to overthink and over-plan things at the outset and the best way to develop characters is to get going, give them some situations to deal with and see what happens. As I really got into the story the characters almost seemed to write themselves. Each time I made a significant addition to a character, such as details of their history, skills or relationships, I added the details to my reference page – purely to make sure I didn’t forget imortant details. The most difficult thing was making sure that all the different timelines tied up together. The story weaves back and forth through the characters’ lives and it was important that references to their past made sense in regard to their age in the present day.

The sound of the impact was surprisingly slight. Kate had steeled herself for something else, something more dramatic than the quiet thump that Robbie made as he hit the ground.
Of course, his death had not been a totally quiet affair. His screams as he fell had been loud enough.
The silence that followed hung heavy in the air, broken intermittently by muffled bird calls and the sea brushing gently over the rocks. When she recalled the scene she was sure she saw a solitary sea-eagle in the far distance, but she couldn’t be sure.
Kate swayed slightly, her knuckles grinding into her hand hold on the ancient cliff face, her left foot slipped and she scrabbled for grip against the crumbling stone.
She had to get down there, he might still be alive. She could not leave Robbie down there. She absolutely could not leave him.

A dramatic rescue attempt has come to light on a remote island off the coast of Albania.
Kate Simmonds, daughter of the late John Simmonds – once hailed as the world’s best ice climber – has been found, barely alive in a remote village on the island of Mortzovia. She has been missing for over 3 weeks. She was alone and on the point of complete exhaustion. Local reports say she staggered into the village late at night several days ago, incoherent and close to death. There was no sign of her climbing partner, Robbie Macgregor.

First reports indicate that they were attempting a previously unclimbed sea cliff on the west coast of the island when Mr Macgregor fell two hundred feet onto rocks below. Miss Simmonds made a brave single handed descent of the face to try to rescue Mr Macgregor. Upon finding him dead she apparently tried to drag his body back to civilisation but was unable to do so. In a rambling statement to a local official she simply said that she had to keep him safe from the birds, believed to be a reference to the large numbers of vultures that populate the area. She is being hailed as a hero. Mr Macgregor’s body has yet to be found.
In other news….

Birds of a feather
An unusual number of birds have begun to flock together on the remote island of Faull. Locals say they have never seen so many birds on the island at this time of year and that the flock appears to contain several different species. Scientists at Edinburgh University believe several migratory birds may have been blown off course by severe storms over the North Sea.

About the Author:
Amanda Darcy lives and works in Sussex, UK. She writes for the pleasure of crafting and telling a good story with the emphasis on mystery, intrigue and fast moving scenes.
Her first novel, “The Curious Prophecy of Birds”, is a fast paced thriller, based in a small island community and explores how the past can so often come to haunt the present and define the future.
Several more books are in the pipeline, including a sequel to “The Curious Prophecy of Birds”.