You are here: Home / Fiction / Historical / The Cub´s Mistress by S. & E. Bohstrom 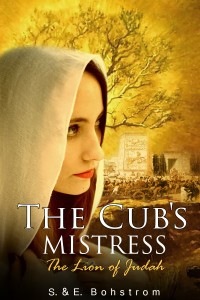 The Cub’s Mistress” takes place in the last years of the Kingdom of Judah, encompassing the last part of the reign of Josiah and the reigns of Jehoiakim and Jehoichin. The Northern Kingdom (Israel) has long since disappeared at the hands of the Assyrians and its people have gone into exile. Assyria itself as been marginalized as the Babylonian Empire has extended its tentacles into the Levant. Many in Judah are foolishly looking to Egypt for protection against this threat from the East, and as a result Jerusalem has been heavily influenced by Egyptian culture. It’s in this setting where the first-person narrative of Moses, a member of the priestly class of Levites, takes place.

We follow the life of Moses from his earliest youth during the time of Josiah to his days as a young priest, as he discovers the moral and spiritual degradation that has infected the priestly class as well as Judean society in general. He wishes to remain loyal to Yahweh, but temptation comes his way in the form of Miriam, a beautiful temptress and married woman. What will happen when her husband finds out?

What Inspired You to Write Your Book?
The book sprang from my historical Ph. D studies in Israel. As I was visiting historical sites, such as Jerusalem, I became curious about how people lived and what they thought about during those ancient days. The book takes the reader back to the declining years of Judah.

How Did You Come up With Your Characters?
The characters are a mix of biblical personalities, persons I know and a degree of myself.

Buy The Cub´s Mistress On Amazon