You are here: Home / Fiction / Fantasy / The Cracked Amulet by R B Watkinson 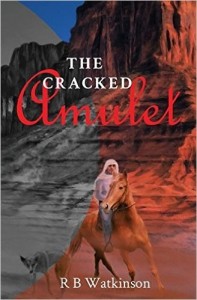 Wefan leaks from the world, and the blood-priests of the oppressive god Murak rise again to bring war to the lands of Dumnon. They search for those with Wealdan in their blood, for it gives them power. Power to twist, alter and control, and ultimately to gain yet more power. They practice horrifying blood-rites on both humans and creatures, they gorge on the blood of innocents, destroy farms and families, towns and cities, conquer swathes of territory and gain new followers. But not all Wealdan-infused blood carries the same intoxicating fuel. The blood-priests seek one above all others.
Against a background of failing states, magik and spirits, Coryn and Katleya lose all that they have and must flee all that they know. Coryn, protected by a cracked amulet, must find his sister and fulfill an oath. Katleya has only her wits and her knives to defend herself. Desperate to reach a haven where she can learn to use her power fully, Katleya can use her Wealdan only to see the Wefan. But she is hunted by those who would use her and her Wealdan for terrible purposes of their own.
A story as intricate and as powerful as any Weaving of the Wefan.

What Inspired You to Write Your Book?
My father was an avid collector of fables, myths and legends from all cultures and had read them to me since I was tiny, and this inspired my early love of the fantasy fiction genre. Then there were the places I visited over the years, like the Empty Quarter on the borders of Saudi Arabia and the UAE, the Hatta region (desert mountains) in Abu Dhabi, the lonely tors on westcountry moors, and Neolithic rings of standing stones, monoliths, barrows and cairns in the wilder, untouched parts of Europe and Scandinavia. These all inspired the settings and initial ideas for my books.

How Did You Come up With Your Characters?
I’m not entirely sure to be honest. Coryn and Dame Mureen came to me in degrees, apart from Katleya. I love the idea of feisty, stubborn women and girls, uncowed by other people or situations and never relying on others to get them out of sticky ones. Leveen sneaked up on me out of the shadows, which is fitting really if you think about it.

Book Sample
Building the pyre didn’t take half long enough, nor did finding the three-forked willow sticks that would help the Cuinannufen find his parents’ spirits and bring them safe to the spirit world of Annufen. Maybe one day they’d be reborn to another life. A better one. He wrapped their bodies in what cloth he could find and, with little Lera’s help, dragged them one by one to the pyre and laid them on the oil-soaked wood. Ma and Da lay close together. They’d have wanted that. He covered them over and hung their stone amulets on the sticks – not that they’d done much to protect them in life. But the Cuinannufen, the spirit-guides of the dead, were real. They’d come for his parents soon enough.
It was only then he realised he’d not seen a single spirit since he’d climbed out of the hidey-hole. And that was strange.
The pyre burned to the ground long before Coryn was ready to go, but he had to go. After all, the writhen might come back. There wasn’t anything left here for either him or Lera anyway. Not even their amulets. No matter how hard he looked, he just couldn’t find them.
From the hidey-hole, he took the coin pouch and the flask of firewater. From what was left of the cold store he took a bag of oats, another of salt and the last jar of honey. He searched around in the ashes of the farm for anything still more or less whole. There wasn’t much. Just some wrinkled winter vegetables from the root-cellar, a hunting knife and a sack. He found a blanket on the line. Ma must have left it there overnight. He didn’t know why. It was a bit damp, but he figured they’d be glad of it soon enough. Once he’d filled the sack, it felt comfortingly heavy.
With Lera holding his hand and the sack over one shoulder, Coryn left everything he’d ever known.

Interview with Author – R B Watkinson