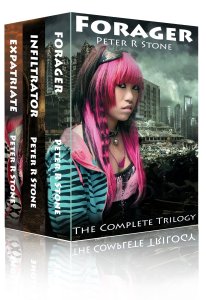 Eighteen-year-old Ethan Jones has a secret he’s kept from everyone, including his parents and foraging friends – he’s a mutant. If he’s caught out, he’ll be dragged away by the town’s paramilitary Custodians to be dissected like a science project.

The dull drudgery of Ethan’s life is shattered when he rescues a mysterious Japanese girl from Skel savages while out foraging in the post-apocalyptic ruins of 2122AD Melbourne.

When he takes the girl back to Newhome, she breaks the town’s rigid conventions in her attempts to get to know him, risking the dire wrath of the Custodians.

And though he knows the rules – that no man is permitted to be alone with an unmarried woman – there is something about the girl that completely captivates him.

Meanwhile, the Skel are ramping up their attacks on Newhome’s foraging teams and infesting Melbourne’s ruins in ever-greater numbers. Is this part of a larger plan that could spell the town’s doom?

What Inspired You to Write Your Book?
A product of the Cold War Generation, I studied the ramifications of a nuclear missile strike when I was in my senior year of high school, learning the effects of nuclear fallout and how to (hopefully) survive it. I have ever been drawn to post-apocalyptic and dystopian novels and films, and eagerly devoured The Day of the Triffids and John Christopher’s Tripod Trilogy when I was a child.A

How Did You Come up With Your Characters?
Some of the characters were in part inspired by people I went to school with. However, they soon took on their own personalities when I started putting them on paper, and they grew from there. The main love interest was inspired by a series of photos I found of a model wearing Japanese Akihabara style fashion.

Book Sample
Michal looked down at me, clearly displeased about something. “You gotta be more careful, Ethan.”

“Me?” I asked, not having the slightest inkling of what he was referring to.

“Yes, Ethan, you,” he confirmed as he turned the key in the ignition and pumped the accelerator gently to get the engine started. The truck was pretty old and I doubted it had a single part that hadn’t been replaced or refurbished at some stage.

“I’d wager my bottom dollar they’re here ’cause they want to find out why our team brings in more metals than the others.”
Our team was one of many that foraged in the ruins outside for non-corrosive metals – gold, platinum, copper, bronze and lead – that had survived the decades since the Apocalypse. We would take them back to the Recycling-Works where they would be sorted, melted down, and handed over to the factories.

“What do you mean?” I replied, feigning ignorance.

“Them other three goons,” he whispered as he jerked his head back to indicate our workmates in the back seat, “they ain’t too bright. They think you just know the best spots to look, but not me. I’ve seen you.”

That sent icy tendrils of dread creeping back into my gut. “Seen me what?”

“You can drop your act with me, okay?” he said softly as he shifted the truck into gear and drove it out of the Recycling-Works yard and towards the town gates. “I’ve heard about people like you, and you’re secret’s safe with me. Just don’t keep hitting pay dirt every day from now on, ’cause those Custodians, they’re not here to protect us from the Skel like they claim, or they’d have brought a Bushmaster instead of that G-Wagon.”

He was right, and I knew it. The Custodians always rode in their Bushmaster Protected Mobility Vehicles when going into situations they perceived as potentially dangerous. That they came in an unarmoured G-Wagon today proved they were not expecting to encounter Skel as they claimed. So that was just a smokescreen to cover their true intention – which was to find out which of us had my aberrant, mutant ability: the ability I used to locate the metals we were looking for.

What was wrong with me? What kind of fantasy world did I live in? How had I convinced myself I could get away with bringing back a load of non-corrosive metals every time, never once coming back empty-handed? We told the boss we just knew where to look, not to mention being extraordinarily lucky. But that kind of naivety really showed just how out of touch I was with reality – or was it typical thinking for teenagers, thinking we could get away with anything? For the Custodians were relentless in hunting down those with genetic mutations. Ninety-nine percent were detected before birth and resulted in the unborn child being terminated. Anyone found with mutations like mine were taken away and never seen again.

About the Author:
Peter R Stone is an award-winning writer, winning the Faithwriters Writing Challenge on three separate occasions, as well as frequently being a Faithwriters Editor’s Choice top ten winner. His winning entries include The Medal and Dreams Forsaken.

Peter R Stone, an avid student of history, was reading books on Ancient Greece from the age of four. Periods of interest include the ancient world, medieval era, Napoleonic times, and the Second World War. He still mourns the untimely passing of King Leonidas of Sparta and Field Marshal Michel Ney of France.

Peter Stone graduated from Melbourne School of Ministries Bible College in 1988. He has been teaching Sunday School and playing the keyboard in church for over twenty-five years. His wife is from Japan and they have two wonderful children. He has worked in the same games company for over twenty years, but still does not comprehend why they expect him to work all day instead of playing games.