You are here: Home / Faith and Religion / Christian Fiction / The Chip Maker: Prophecy of the Beast by Bridgette L. Collins 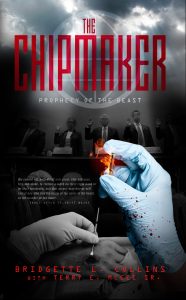 FORETOLD IN THE BIBLE: A mark on their right hand. No one may buy or sell. The mark of the beast. It’s not fiction. It’s prophecy.

Author Bridgette L. Collins is definitely excited about her new literary project with Author Terry E. McGee Sr. The Chip Maker: Prophecy of the Beast is definitely a thriller filled with drama and intrigue that stretches one’s imagination. Imagine? A mandatory RFID chip implanted into your right hand. Consider it like an expansion of the chip technology in your new debit/credit cards.

This action oriented thriller will forever change the way you look at devices equipped with computer chips. Jim Natas has spent the last decade enhancing the functionality of radio frequency identification (RFID) technology to identify, track, and provide information on every living organism via an implantable chip. His concealed mission: The creation of one government, one religion, and one financial system, enabling him to control the world.

Natas partners with Global Media Sources, the world’s largest media and entertainment conglomerate, to establish a real-time, adaptive communications infrastructure to orient the implantable chip to the world. Recognizing the need for influential support, David Denmart, chairman and CEO of Global Media Sources, and his executive team recruits religious officials, political leaders, and notably famed entertainers to use their community and social media platforms to endorse, support, and persuade people to get chipped.

The executive team plans for a widespread movement using various platforms to ignite fear and create chaos. Religious, political, and social warfare between chip supporters and protesters intensifies with the execution of targeted suicide bombings, plane crashes, civilian attacks, kidnappings, and assassinations. It’s the summer of 2021 and Natas’ goal is to have every human being, 7.8 billion, chipped by August 2021.

The choice to accept or reject the implantable chip, today’s modern-day beast, becomes the greatest test for mankind.

What Inspired You to Write Your Book?
This book is intended to inspire others to focus their thoughts, feelings, and actions on life after death. The loud and clear message inside “The Chip Maker: Prophecy of the Beast” will provoke the reader to assess the current path of their lives in preparation of life after death.

How Did You Come up With Your Characters?
The characters were created as the writers mapped out chain of events signifying Jesus Christ’s second coming. Of the characters created for the story line fifty percent are believers and the other fifty percent are non-believers. Based on biblical scripture, “He causes all, both small and great, rich and poor, free and slave, to receive a mark on their right hand or on their foreheads, and that no one may buy or sell except one who has the mark or the name of the beast, or the number of his name. (Revelation 13:16-17 NKJV)”, the believers who are all from a diverse backgrounds will die before they accept the mandatory RFID chip.