You are here: Home / Book Trailers / The Check Out by Richard A Lester @ralesterauthor 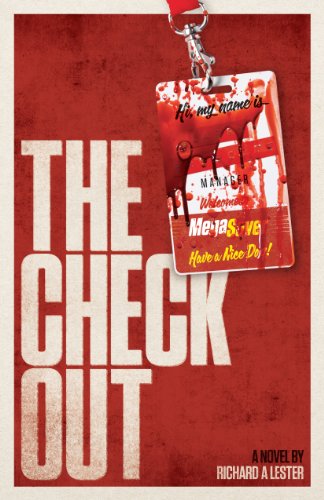 Failing grocery store manager Larry Prescott just wants a quickie. With a frigid wife waiting at home, Larry decides to have some extramarital fun with an employee named Maxine Watkins. Though he has no way of knowing it, Larry is sowing the seeds for a crime spree that will be dubbed “The MegaSaver Massacre.“

The Check Out is a satirical thriller that will appeal to fans of Carl Hiaasen and Christopher Moore. It is the story of a $10,000 giveaway, and the employees who independently decide to heist the money on the same night. An ensemble piece, each chapter focuses on the motivations and actions of a different main character. Larry Prescott is an arrogant drunk whose affair quickly spirals towards danger. Maxine Watkins is a scheming liar, determined to claw her way out of indigence. Terrence Claybrook, the assistant manager, is an escaped convict trying to keep his past from catching up to him. Roland Tillman, a blood thirsty fugitive, reunites with his former cellmate during the MegaSaver robbery. Brad, an addiction ridden stocker, tries to turn his life around while picking up the pieces of a broken marriage. They each see the prize money as their only lifeline, and are determined to do everything necessary to grab it.

How did you decide to create a trailer and what was your experience?
I come from an indie film background. I have directed my own feature, as well as worked on films for others. From day one, I knew I’d be making a trailer for my book. It just seemed like the best idea to convey the tone to the readers. Not to mention, I knew it would be a lot of fun.

The actual shoot only took a day. My friends from Azbest films and I shot most of it in a friend’s back yard. Other shots were just stock footage that can be licensed from various web sites. (I recommend searching and searching until you find a shot you like, that is affordable. Some sites will charge you an arm and a leg!)

What Inspired You to Write Your Book?
I’ve written short stories since I was a kid. When I was in my twenties, digital film was in its nascent stages, and I took advantage of it. I worked on a lot of smaller productions, and my storytelling ambitions outgrew my budgets. Instead of spending the time trying to raise the money, hire a crew, and find a cast, I decided to write this story as a novel. In many ways, it was much more fun. It allowed me to explore characters in a way that you can’t do in a film.

Author Bio:
Richard A. Lester (b 1978) is an American writer/filmmaker. He has written scripts, short stories, and one novel to date. He has also worked on several plays, and directed an independent film.

His literary influences include Carl Hiaasen, Christopher Moore, and Donald Ray Pollock. His other interests include history, science, and education.