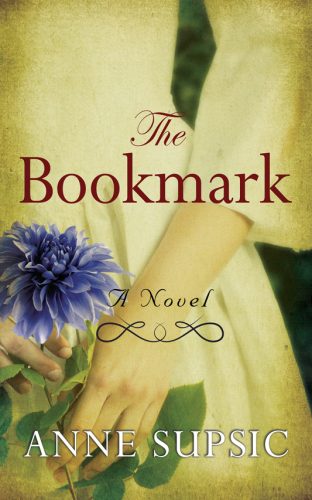 The legendary Marquis de Lafayette,
A forgotten Moravian woman who became his nurse,
And a bookmark with a secret…

1777. After being wounded at the Battle of Brandywine, the Marquis de Lafayette is taken to the isolated religious community of Bethlehem, Pennsylvania, where he is cared for by a Moravian Single Sister named Liesl Boeckel who has little patience with the arrogant Frenchman and his unwelcome curiosity about her life.

2005. When Abbey Prescott inherits her grandmother’s house in Bethlehem, she discovers an eighteenth-century bookmark, which may reveal a romance between Liesl and Lafayette, and she becomes determined to solve the mystery. However, her quest is complicated by the aftershocks of a failed love affair and a possible romantic entanglement of her own.

The Bookmark is an immersive romantic mystery that illuminates a little-known piece of American history through the lives of two women, separated by the centuries but alike in their determination to confront the past and find a way forward.

Targeted Age Group:: 50 and over

What Inspired You to Write Your Book?
I first learned about Liesl Boeckel at the Moravian Museum in Bethlehem, where I’ve worked for many years as a volunteer docent. I knew nothing of Lafayette’s possible romance with a Moravian woman until the museum added a new exhibit with a painting of Liesl, Mrs. Boeckel, and Lafayette. I could hardly believe this unlikely connection between the Moravians and my favorite Frenchman. I remember thinking that someone needed to write a book about this. And then, a little voice inside me said, Why not you?

How Did You Come up With Your Characters?
My historical characters were easier to create because I could research their lives and their time period, and they brought with them actual events that provided a basic structure for their stories. I had access to a wealth of information regarding Lafayette, including his own writings, which helped me to envision his behavior. Although documentation on Liesl was quite sketchy, I had access to information on eighteenth-century Moravian life, and the knowledge I had accumulated as a long-time volunteer docent at the Moravian Museum in Bethlehem, Pennsylvania.

My modern-day characters are purely fictional and required more effort to create. I initially drew from my life experiences but modified them to fit the story. For example, the friendship between Abbey and Kera is inspired by my relationship with my best friend, but my fictional characters evolved in ways that bear no resemblance to myself or my friend. It really is true that a book takes on a life of its own and often leads you to unexpected places.