You are here: Home / Fiction / Fantasy / The Book of One: A New Age by Jordan Baker 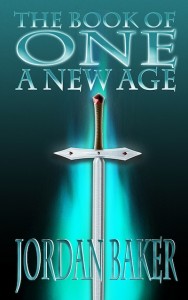 A young man, trained since birth in the arts of war; a princess whose powers are awakening; a regent who would be king, a queen who would be an empress; a dark priesthood of mages; and the mind of a god, are revealed in the Book of One.

In this Epic Fantasy series by Jordan Baker, a tale of magic unfolds for Aaron, a mysterious young man who is plagued by headaches that are somehow linked to magic. Raised in the wilderness and taught to be an expert swordsman, Aaron finds his life irreversibly changed by events that send him on a journey to discover his true destiny.

What Inspired You to Write Your Book?
I loved reading fantasy and read every book I could find until I ran out of books and series to read. I had an idea for a story that had all the elements of my favorite fantasy books but was focused on a different sort of struggle, the question of power itself being a central theme. While I thought about the story concept and some ideas that went along with it, some characters appeared in my thoughts, so I started writing my own story. The earliest version was written on a spiral notebook when I was eleven or twelve and I rewrote it again when I was finishing high school and transferred it to a computer. As I was actively discouraged to a degree from pursuing creative things at the time, and busy with campus life and the work life that followed, the story sat in a writing folder for years, always at the back of my mind, until chance prompted me to continue the story.

How Did You Come up With Your Characters?
I very clearly remember having the idea that the story should start with the classic trope of the young man from humble beginnings who discovers that he is a prince or a wizard — a start to fantasy stories that has been used countless times, and that isn’t necessarily a bad thing, by the way — but instead of having the entire story be like the usual magical superhero coming of age as they learn about their amazing powers sort of tale, the idea was to give that character weaknesses and difficulties so they will need help from friends, who are also important to thee story. They will also be put in danger, maybe even by the choices of the main hero, but they must also step up and realize their own strengths and conquer their weaknesses to win the war.
There may be heroes in battle, but it takes more than one person to win a war.
It takes many people, pulling together and trusting each other in difficult and often disparate situations to find victory, and it was from that starting point and the creation of the different lands and peoples in the world of the ‘Book of One’ that the other characters began to emerge.