You are here: Home / Fiction / Paranormal / The Bond, A Paranormal Love Story by Karen Magill @KarenMagill 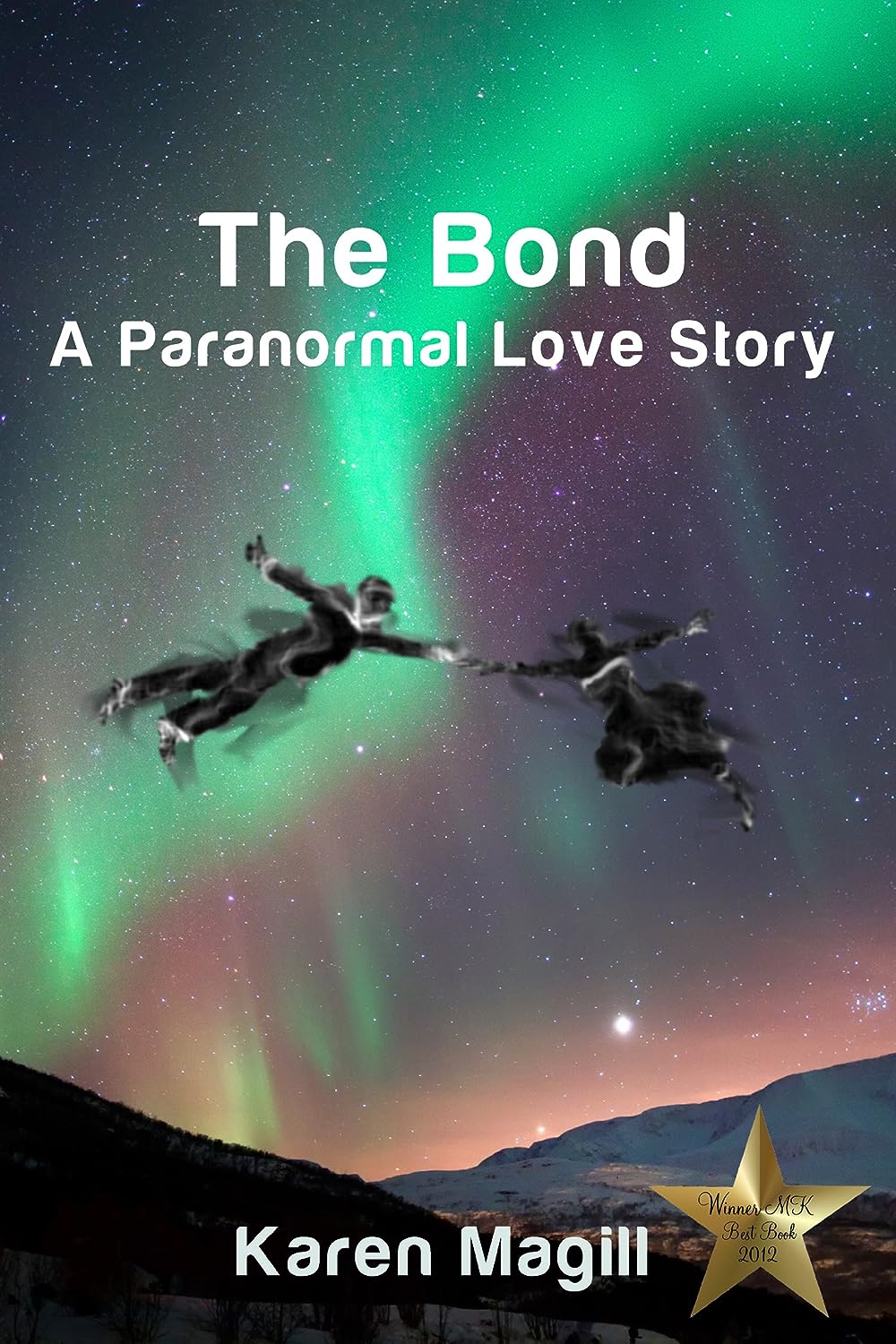 A woman, Laura Neill, in Vancouver is struck by a Chrysler Intrigue while crossing the street. At the same time in Toronto a car also strikes Julian Rule. Both people have an out of body experience and meet as they are floating. Their ethereal forms bond as one before separating – each taking a part of the other’s soul with them as they return to their bodies.

When the two people wake up, they remember the experience they shared and have memories of each other. The simultaneous accidents created a psychic bond. They are truly soul mates. Although Laura is haunted by visions of Julian that she cannot understand, she has decided to make dramatic changes in her life. One of them is becoming engaged to a member of England’s nobility that has recently appeared in her life. When he senses that she is in danger – a feeling that is confirmed by a psychic friend – Julian goes to Vancouver to come to her aid. With the help of a detective, Julian is able to prove that Laura’s fiancé is a con artist and a murderer. When Julian confronts the man, he and Laura are placed in imminent danger.

What Inspired You to Write Your Book?
I wanted to write a love story but I wanted a different way for people to meet. I have always been interested in the paranormal and having the couple meet in a out of body experience was different.

How Did You Come up With Your Characters?
I took a little bit from my past in retail and thought of an exciting male lead.. An artist.

Book Sample
Laura knew she was being placed on a stretcher; she could see it. But it was as if it was happening to someone else. She felt as if she was floating high above the street and the activities below. She was just a spectator.
She could see the police officers talking with a teenage boy. The poor young man looked so frightened as he watched the paramedics work on her. A young girl sat on the curb weeping. Laura longed to comfort her. Surely the situation wasn’t that serious.

It was strange. Laura could see everything and she knew that the injuries she had sustained were maybe serious but she couldn’t feel any pain. She felt incredibly free and weightless.

Detached, she watched the stretcher with her body being loaded into the ambulance and the lights go on. As the vehicle started to move then picked up speed, Laura felt a sharp tug and she followed the ambulance.
In the emergency room, the scene was organized chaos. Laura winced at the sight of her inert body. There was so much blood; her favorite cream dress was ruined. There was no way she going to be able to get all the blood out of the silk.

Laura watched the hospital staff work on her body. She was intrigued by the procedure yet felt strangely detached from everything. That was her lying on the gurney and she may be dying; yet it didn’t seem to matter.
She felt herself drifting away, floating out and above the hospital. Laura looked down on the city, growing smaller. The ocean retreated as she felt herself being pulled east.

Soon the lower mainland was out of sight and Laura was looking down at the majestic Rocky Mountains. Even soaring above them, the Rockies were awe-inspiring.

Whatever force was pulling her increased in intensity as she sped over the prairies, always heading east.
Laura felt a jolt course through her and she looked up. Another hazy being was floating towards her. As it got closer, Laura could see it was the figure of a man.

Her progress slowed the closer they came together. For a moment they looked at each other curiously. Then he stretched out a hand and Laura responded in kind.

When the two ghostly hands touched, they melded to become one. Each of the celestial humans felt a shock that threw them back a few feet before coming back together. Their bodies became one incandescent being glimmering with iridescent hues of every color in the spectrum.

If someone on the ground had happened to look up, they would have seen a display more impressive than the famous Northern Lights. The form in the sky, which could vaguely be made out as human, glowed with vibrating colors. The hues of the colors fluctuated in intensity yet were always magnificent. It would have left a person feeling awe-struck as they unwittingly watched two beings joined as one.

Laura was filled with joy, hope and wonder. She felt as if she was touching heaven. No words were spoken between the two beings but Laura could sense that the man felt the same way. She knew his name was Julian and, like her, didn’t understand what was happening. She thought her name and felt his acknowledgment. Together they floated across the sky.

Julian grasped her hand again, marveling at the completeness he felt when they became one. Nothing, not even the success he had found earlier this evening, could match the joy he felt at this moment. He stared at the ethereal being beside him and was overwhelmed by a desire to kiss her. He lowered his head and, when their ghostly lips met, a burst of brightly hued sparks cascaded from their united mouths.

Regretfully, he pulled back. The certainty that, should they stay like this much longer his physical being would cease to exist, filled his mind. He knew he had to return to his body, as did Laura.

Reluctantly, Laura acknowledged she had to return. Slowly she pulled her hand away, feeling a sense of loneliness as she watched Julian begin to drift away. She wanted to call him back, to continue to share the feelings he had brought her. Yet, she felt something pulling her back, back to her body.

In the distance, Laura heard someone say.

“It isn’t hopeless, we haven’t lost her.”

Laura began to return to her body, a glimmer still emanating from her, and she heard Julian promise.

About the Author:
Forced to leave the workforce in 2000 by the onslaught of MS, Karen saw this as an opportunity to explore her lifelong desire to write. In February of 2014, Karen independently published an inspiring story of her journey so far with MS entitled On The Right Side, My Story of Survival and Success.

Ms. Magill believes that anything is possible and when she writes fiction, she leans towards the paranormal. She writes about extrasensory powers as if they are commonplace because, in her mind, we are all capable of those gifts.

To date, Ms. Magill is the author of four published paranormal novels, including the award winning The Bond, A Paranormal Love Story.

Karen lives in an eclectic area of Vancouver Canada and draws inspiration from the history and stories around her.

Links to Purchase eBooks
Link To Buy The Bond, A Paranormal Love Story On Amazon