You are here: Home / Fiction / Science Fiction / The Blunt End of the Service by L.J. Simpson 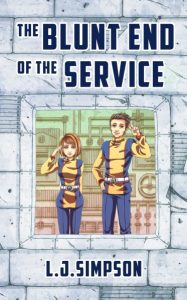 With a little more drive and ambition, Chuck Poulson might well have found himself serving as first officer aboard a hyper liner. By the same token, if Cadet Penelope Parker had accepted the amorous advances of the notorious Commander Dickens, she might well have been posted to the Cromwell, the latest Type 53 destroyer.

But with things as they stand, Chuck and Penny find themselves serving together aboard the half derelict space station Orbital One, alongside a motley crew of ‘misfits, slackers and has-beens’.

And that would have been that, but their neatly ordered world is suddenly turned upside down as they find themselves at the centre of intrigue in a plot involving sabotage, larceny and murder. Can Penny redeem herself and put her fledgling career back on track? Can Chuck just muddle through it all with his limbs still attached to his body?

Cut off from outside help, they find themselves propelled to the sharp end of the service and with things not always as they seem, they must negotiate ruthless staff officers, overcome battle hardened marines and outwit inter-stellar crime

What Inspired You to Write Your Book?
When I set out to write The Blunt End of the Service, was the first piece of advice I received was ‘Look for inspiration’. After due deliberation I decided on the things I enjoyed the most: Star Trek – that most famous of sci-fi dramas, Lewis, the wonderful detective series set in the beautiful university town of Oxford, and Terry Pratchett, the creator of the amazing Discworld novels.
As a consequence, my tale is… set in space and has detectives. As for the late, great Mr. Pratchett, would that I were able to emulate his extraordinary imagination and gift for writing but alas, some things are not meant to be.

How Did You Come up With Your Characters?
Many of the characters in the book are composites of people I’ve met over the years. Everyone has their little foibles and idiosyncrasies, strengths and weaknesses… and when you get to my age you’ve generally met at least a few that are interesting enough to form the basis of a character. Having said that, I’ve never met a murdering psychopath so as far as that one’s concerned I just had to use my imagination and make everything up.

Buy The Blunt End of the Service On Amazon