You are here: Home / Fiction / Historical / The Blue Diamond – The Razor’s Edge by P.S. Bartlett 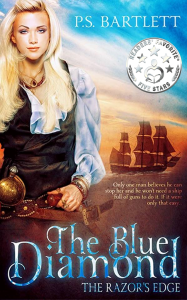 Ivory Shepard didn’t want to be a pirate when she grew up but she didn’t plan on being orphaned and alone at thirteen with her three cousins either.

After a Spanish raid in Charles Towne left them with nothing, Ivory held her cousins together, trained them to fight for their lives and led them to a life of quiet refuge on the banks of the Ashley River. Out of reach of the hands of unscrupulous men, they found life on the farm a tolerable substitute for the traditional alternatives life would force onto them—until the night the pirates showed up.

Setting foot on that first pirate ship was nothing compared to the life of freedom and adventure awaiting them, once Ivory and the girls were through playing nice. Only one man believes he can stop her and he won’t need a ship full of guns to do it.

If it were only that easy…

What Inspired You to Write Your Book?
I love stories about women in non traditional roles as well as swashbuckling pirate stories. I’m a huge fan of Pirates Of the Caribbean and decided to put my own twist on it.

How Did You Come up With Your Characters?
Oddly enough, my characters are based on some very close and wonderful friends. Their personalities and our relationships gave me ample material to bring these four fabulous and brave women to life.

About the Author:
Award winning author, P.S. Bartlett, was born on Valentine’s Day many moons ago in South Baltimore, Maryland, less than a mile from Fort McHenry and Federal Hill.

Her first novel, “Fireflies,” was published with GMTA Publishing in 2013 and the prequel to “Fireflies,” entitled “Hope From the Ocean,” was published in March of 2014. She loves history and historical fiction. She gets her history fix via movies, television and of course, books although she enjoys reading almost every genre.

“I’m taking a fantastic voyage. Won’t you join me?”