You are here: Home / Children and Young Adult Books / The Aviator Owls Save Christmas by S. A. Porcher 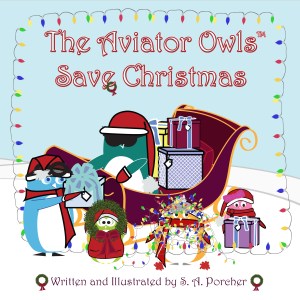 It’s the night before Christmas and the Aviator Owls are having fun when they find Santa, and he’s in trouble! The five owls are quick to offer their help by getting the town ready for a wonderful Christmas, and in the process they learn that the true meaning of Christmas is about more than getting gifts.

What Inspired You to Write Your Book?
I love Christmas. It’s my favorite holiday (and also my birthday). I love how the season seems to bring magic and happiness with it, so that made it easy to write about, but I also think it’s really important to teach children about the happiness of giving. Since every Aviator Owl book supports a charity, and we had chosen Toys for Tots before writing the book, we wanted to make sure that it had something to do with giving physical gifts as well, which inspired the ending.

How Did You Come up With Your Characters?
The five main Aviator Owl characters were born on a pad of paper in 2009 while I was sitting in my living room doodling. I was trying to sketch a fox so I could sell some fox-related designs on Zazzle, but I found that the “fox market” was pretty over-saturated. So I moved on to my next big love: owls. Hoit was first (although his named changed to Harry early in 2014), followed by Bernie, Jasper, Kevin and Mina. Eventually they were redone in Adobe Illustrator, and from their they began a journey that eventually grew into its own company in 2013. Now the characters are in three books, with several more to come!

Book Sample
Mina had a doll
for an owl named Jane.
Bernie would give away
his model airplane.

Jasper had a soccer ball
that would go to Ike.
Kevin had a favorite game
he knew Steve would like.

Harry had his telescope
which would go to Roy.
And so all the owls were ready
to give away a toy.

About the Author:
S. A. Porcher is the writer and illustrator for Aviator Owl Books Inc., the company she co-founded in December 2013. AO Books is dedicated to inspiring and educating children as well as raising awareness and money for great causes. For every book sold, 50% of the profits go to the cause it supports.

Currently S. A. Porcher is a student at Purdue University. In May 2015 she will graduate with three degrees in English, Creative Writing, and Industrial Design.