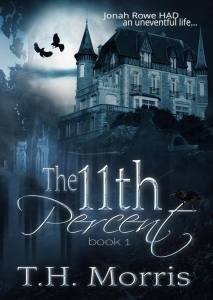 Jonah Rowe, a bored accountant and aspiring novelist, is sick and tired of his job as an accountant. He is burnt out from all the office gossip, politics, and double talk, and he longs for his life to matter. Truth be told, Jonah wants anything besides the lame routine of coasting through his workday….only to psych himself up enough to do it all over again the next day. He only wishes that his life had some meaning.

Amidst the combination of writer’s block and society’s expectations to have a “real” 9-5 job, Jonah gets his wish.

His world is turned completely upside down one evening when his vision inexplicably turns blue for several moments. He then receives a warning from a spectral visitor that not only is he in danger, but everything in his life is about to change.

Overnight, Jonah transforms from an overworked, underpaid accountant to the centerpiece of a spectral battle. Will he rise to the occasion? Can he accept that everything he knows about life and death is completely wrong? And, most importantly, will he be able to comprehend and harness the power of the mysterious 11th Percent?

Follow Jonah’s journey in this new breed of ghost story!

What Inspired You to Write Your Book?
The 11th Percent was sparked from an uninterrupted, seven-hour dream that I had on a Thursday in February 2011. When I recounted the story to my wife, she told me flat out that it was something that needed to be recorded in a book. I started writing the story three days later, in the car with my notebook propped against the steering wheel. I finished it three months later.

How Did You Come up With Your Characters?
Truth be told, I didn’t actually come up with characters. It was almost like once I aware of the story that was in my mind, the characters that would be involved in it made themselves visible in my consciousness. It almost seemed as though they were waiting for me to find the story in my mind.

About the Author:
T.H. Morris is a lifelong writer who was born in 1984 and raised in Colerain, North Carolina. He has been living in Greensboro, North Carolina for the past twelve years. He is an avid reader, primarily in the genre of science fiction and fantasy because he enjoys creating people, situations, and worlds. He holds hold a Bachelor’s and Master’s Degree in Social Work from the University of North Carolina at Greensboro, and spent several years as a therapist and mental health clinician. He has been writing in some way, shape, or form ever since he was strong enough to hold a pen or pencil, but the expectation of securing and maintaining a traditional 40 hour job was the expectation of all around him. The call of writing never diminished, though, and soon became too powerful to ignore. Morris began writing The 11th Percent in 2011, and is currently working on its sequel. He still resides in Greensboro, with his wife of six years.