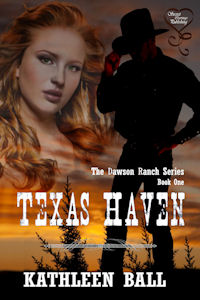 Rancher Burke Dawson wants children; unfortunately, that also includes a wife. His first wife was a citified hellcat who stole half of his ranch. Now, Burke is determined to find an honest, country girl with no expectations of love.

What Inspired You to Write Your Book?
I moved down to Texas eight years ago from New York and I was already reading western romance – five years ago I decided to try writing and was amazed people liked my books

How Did You Come up With Your Characters?
Of course there was going to be a cowboy and a woman. I added personality traits and flaws to both.

Book Sample
They sat on the swing in complete silence. The sky was beginning to darken. Burke put his arm around her, pulling her close. He could feel her tremble at his touch and it humbled him. He couldn’t remember a time when a woman had such a reaction to him. The urge to pick her up in his arms and carry her to his bed was strong but he didn’t dare. He didn’t think she was the type for a one-night stand and that was all he was willing to offer.

Although he found her damn attractive, she was off limits. All he needed equated to an unpaid housekeeper not a woman that probably had no practical skills, even so, she was very tempting. There seemed something so vulnerable about her that it made him long to protect her.

He made the mistake of looking down at her upturned face. Her luminous green eyes trapped him. Unable to resist the pull of her he carefully leaned down and brushed his lips against hers. He only intended for the kiss to be brief, but she tasted like honey and he had to have more.

Annie moaned as Burke kissed her again. He swiped his tongue along the seam of her lips, coaxing her mouth open and deepening the kiss. His arms tightened around her, pulling her close to him. She smelled of sunshine, sweet and warm. Reluctantly he let her go. Annie smiled back at him anyway, and it pleased him. She looked lovely in her yellow sundress with her curly auburn hair falling down her back, and he couldn’t help but admire her cute figure.
Gently, he removed her arms from around his neck and looked down at her with hooded eyes. Highly aroused by her, it was by sheer willpower that he stopped his advances. Her bruised lips looked inviting to him and her eyes shone with pleasure. God he wanted her. Burke smiled at her enthusiasm. The last woman in his house had overtly insulted every inch of it. He could hardly believe her reaction. She seemed genuine in her pleasure over everything. But, he reminded himself that it didn’t really matter. Burke grinned as he watched her scoop up the cat and whisper in its ear, her happiness so apparent. For a second he was glad that he adopted that ornery cat.

Regretfully, he stood up and moved away from her. “It’s been fun.”

“Yes it has,” Annie stood. She wobbled a bit and made her way to the porch stairs. She looked at Burke with her heart shining in her eyes. “Maybe you could consider me as a candidate for a wife?” she asked quietly.
He hesitated, not knowing what to say.

“Never mind.” She hurriedly rushed down the stairs to her car.

Maybe in another life, it would have worked, but he knew what the ending to their story would be.

About the Author:
Sexy Cowboys and the women who love them…Finalist in the 2012 RONE Awards. Top pick, five star series from the Romance Review. Kathleen Ball writes contemporary western romance with great emotion and memorable characters.Her books are award winners and have appeared on best sellers lists including Amazon’s Best Sellers List, All Romance Ebooks, Bookstrand, Desert Breeze Publishing and Secret Cravings Publishing Best Sellers list. She is the recipient of eight Editor’s Choice Awards, and The Readers’ Choice Award for Ryelee’s Cowboy. There’s something about a cowboy….