You are here: Home / Fiction / Horror / Testament by Edward V’Kanty 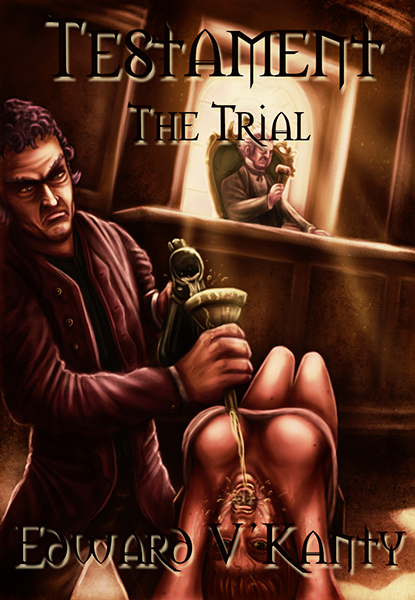 For the first time anywhere, Testament draws the reader into the New Yorke witch trials! Experience this 17th century horror firsthand and decide for yourself whether or not to condemn the accused for heresy and witchcraft.
Testament: The Trial It is a matter of public record (and public knowledge) that, in the year 1692, the infamous witch trials swept through the colony of Salem, Massachusetts. While precious little may be known about the witch trials of Salem and those witches that the good puritans of Salem persecuted, there is even less known about the witch trials that swept through the remainder of the Thirteen Colonies. For instance, in 1665, twenty-seven years before the Salem witch trials, the people of New Yorke believed themselves to be plagued by the devil’s works and so the New Yorke Court of Assizes was established to deal with this spiritual epidemic. The New Yorke witch trials began with a very unusual case of witchcraft and heresy: that of Ralph and Mary Hall.
The following fictionalized book is based upon the trial of Ralph and Mary Hall, accused of practicing witchcraft and sorcery against the family of Ann Rogers. This book takes a look at what may have happened and how New Yorke, like Salem, could have fallen prey to the fear of witchcraft.
There is but one catch: You, the reader must determine the path this colony is to follow. There can be no greater responsibility than to be called upon to serve as a juror in these witch trials. After reading the journal entries of apprentice magistrate Singent Straubb and the court documents regarding the trial of accused witches Ralph Hall and his wife Mary, how will you cast your verdict?
Testament Verdict: Guilty You have chosen to convict the Halls and condemn them to death as witches. Now read the remaining entries in the journal of Singent Straubb to learn what fate your verdict has had upon the entire colony of New Yorke…

Testament Verdict: Not Guilty You have chosen not to convict the Halls and they shall be released forthwith. Only the journal of Singent Straubb may tell what fate your verdict will have upon the entire colony of New Yorke…

What Inspired You to Write Your Book?
I have always been interested in the history of the Salem witch trials and I ultimately began researching witch trials in other parts of colonial America. It was interesting to learn that New York had its own witch trials and I felt that was something I’d like to explore in a fictional story.

How Did You Come up With Your Characters?
My characters are loosely based upon the original participants of the New York witch trials, but, as my writing progressed, they each developed into their own unique identities.

3d day of August, 1665
It is late in the evening, very late to judge by the fact that mine is the only illuminated window on the street, and I have only just returned home. I would very much like to retire, to put this day to an end, but I must record the events of the day now whilst the details are still fresh in my mind. Where ever shall I begin? I suppose it’s best to relate the day in its entirety and, once that has all been recorded, I shall better be able to express my feelings, those emotions swimming around in my head that would keep me from unconsciousness, even if I were to retire right at this very moment. Speaking of sleep, I slumbered very little last night and I suppose that’s just the way of it for anyone about to realize their dream with the next sunrise; I was awake and out of bed long before my father. Hoping to make an exceptionally good first impression, I bathed thoroughly with a sponge and some lye, before dressing in my best Sunday suit. I remember thinking to myself, as I prepared for the day, that my first week’s pay must be spent on new clothes and better toiletries. An officer of the courts should certainly be far more presentable than the average citizen. He should be a physical manifestation of the highest principles of law, or so I’d imagined in my dreamy mind.
By the time father was up and preparing for his own day, I was ready and anxious to head out the door to begin my very first day of apprenticeship. It was all he could do to get me to sit down at the breakfast table for a mere five minutes, but I did concede, not wishing to disrespect him so soon after he’d agreed to allow me to pursue this dream of mine. As soon as he placed the fresh milk, steaming eggs, and toasted bread in front of me, my empty belly reminded me that I’d neglected one of the most important morning duties in my excitement. As I ate the prepared meal with enthusiasm, he spoke softly, kindly to me.
“Son, you are about to go out into the world to make your mark as a man and nothing could fill me with more pride.”
I glanced up at him briefly, before I gulped down half of the glass of milk. He must have read my thoughts in my expression, because he continued:
“Perhaps this isn’t the profession I would have chosen for you, but I am proud of you, nonetheless.”
“Thank you, father.”
His benevolent smile, which has very rarely made an appearance in our household since mother’s passing, graced his moustache-shrouded lips. “I have every confidence that you will become the fine hard-working and upstanding gentleman that your mother and I have dreamt you would be.”
“I will strive to never disappoint you or to tarnish mother’s memory.”
He smiled once more. As that smile faded, he produced his pocket watch and presented it for me to view, as he said in mock alarm, “Now go! You mustn’t be late on your very first day!”