You are here: Home / Fiction / Action & Adventure / Tarzan in the Heart of Darkness by Walter Donway 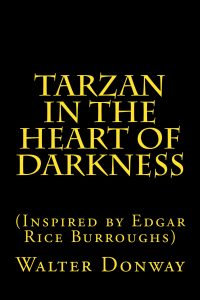 The heroic young African woman whom Tarzan meets, N’Kimba, has traveled across the midsection of Africa from the east—the hunting grounds of the legendary Maasai lion hunters in what is now Kenya and Tanzania. She comes in search of her parents, seized by slave hunters and taken back to work in the rubber plantations of the Congo Free State.
Her own home, to which she and Tarzan later journey, is on the east side of Africa, bordering the Indian Ocean. It is the homeland of the Maasai, but also the vast territory of Arab-Islamic slave traders, who for centuries took slaves from all populations not of their religion, but especially the Bantus. On the Indian Ocean coast, the island of Zanzibar was a slave market through which millions of African men, woman, and children were sold into slavery worldwide.

What Inspired You to Write Your Book?
Dedicated to my father,
Raymond Donway,
Who read to me the Tarzan books
And so, bequeathed to me
A love of the heroic in man,
The best within us,
And that has made all the difference.

I remember those evenings in the farm house I sat beside dad on the couch as he read the latest second-hand Tarzan book he had bought at the Strand book shop in New York City on his business trip. The stories inspired me never to settle for less than the ethos of man’s nobility.

Begin your journey with “Tarzan of the Apes,” and do not stop. Anything Burroughs wrote is worth reading.

My novel supposes a young Tarzan’s experiences not part of the real Tarzan story, largely compatible with it. Above all, and not open to compromise, my Tarzan’s character and actions are the “real” Tarzan.

Nevertheless, the story of Tarzan is the one told in the published works of Edgar Rice Burroughs, nowhere else. But, as in the case of other characters that take on a life of their own, the lovers of Tarzan will speculate on what might have been.

How Did You Come up With Your Characters?
My novel supposes a young Tarzan’s experiences not part of the real Tarzan story, largely compatible with it. Above all, and not open to compromise, my Tarzan’s character and actions are the “real” Tarzan.

The story of Tarzan is the one told in the published works of Edgar Rice Burroughs, nowhere else. But, as in the case of other characters that take on a life of their own, the lovers of Tarzan will speculate on what might have been.

Book Sample
Tarzan was moving even before he turned his head to take in the scene. So, too, was N’Kimba. When they did look, they saw Kakenya, a spear in one hand, a flaming firebrand in the other, jabbing at the snarling, enraged faces of two lionesses. They heard Elena scream.
The Maasai are legendary for fighting full-grown lions, using only their heavy spear with its elongated, razor-sharp steel head. Upon conquering his first lion, the Maasai boy receives a second name in recognition of slaying Simba with a spear.
That would not avail him, or Tarzan, if Sabor’s dozen or more sisters came bounding into the clearing to join the attack. On shore, Tarzan scooped up his father’s knife, his only weapon. Then, as he charged, he voiced a roar and rising scream that was the challenge cry of the bull ape. Tarzan’s presence, the baffling cry from this human, and the fire that faced them in Kakenya’s hand, seemed, for a few moments, to alarm the lionesses.
With a last snarl, one twisted about and bounded into the brush. Kakenya seized this moment of advantage, hurling the firebrand directly into the face of the remaining lioness, and, in the same second, throwing his arm far back to drive the spear into Sabor’s neck. Without its steel head, which Kakenya could not make in the jungle, the spear was less deadly, but its sharpened and fire-hardened point lodged just when the lioness’s throat met her chest. She rose in fury and pain. It was then that N’Kimba, who had reached her bow, shot a poisoned arrow into the lioness’s left side just behind her shoulder. As the arrow pierced the lioness’s heart, Sabor screamed and rolled over.
Tarzan knew that at best they had won a few minutes. The screams of the lionesses, the smell of blood, would draw the others, who, by now, could number two dozen.
N’Kimba, Kakenya, and Hasana were hurrying toward the safety of the trees, Kakenya carrying his spear, N’Kimba her precious poisoned arrows. But Tarzan heard Elena’s scream and her pleas for help. She had gotten a thoroughly panicked Charles to the shore and was standing beside him, crying for help.
Charles was staggering to where his rifle lay. His left wrist dangled uselessly from his arm, so he picked up the gun with his right hand.
Tarzan, still naked, took Elena’s arm and pulled her toward the trees. She held herself back, calling to Charles. The ape man cast one glance at his erstwhile attacker and waved for him to follow. Already, Tarzan heard all around the clearing the roars and coughs of Sabor. The beasts would be cautious moving to the clearing; but when they saw the puny humans, they would charge.
Tarzan lifted the still dripping body of Elena and tossed her over his shoulder. He ran for the trees, where N’Kimba and Kakenya were boosting Hasana into the lower branches.
Three things, then, happened simultaneously.
Elena screamed, “Charles! No!”
Tarzan, as he ran, turned to see Charles’s rifle lifted and aimed at him.
N’Kimba’s arrow protruded from Charles’s neck.
The shot Charles fired went wild as he pitched forward with a strangled cry, dropping the rifle. Elena shrieked, struggling with Tarzan.
Then, Sabor charged. Three lionesses streaked into the firelight with the roar to paralyze their victims for a few precious seconds until it was too late.
Kakenya had reached the lowest branch of a tree and was reaching down for N’Kimba. But turned to raised her bow and bury an arrow into the neck of the lioness closest behind Tarzan, then she turned and seized her father’s hand, scrambling upward.
A few yards ahead of the nearest lioness, Tarzan leaped for branches of the tree, the body of Elena over his shoulder. Had he been a second or two slower, it would have been too late. As it was, the lioness leaped into space to seize Tarzan’s disappearing legs. Had it been a lighter, nimbler Cheetah, the leopard, Tarzan might have been dragged back to the earth.
As the five members of the party climbed higher, the lionesses made wild leaps, snarling in frustration. Before long, though, their attention turned to easier meat. They were tearing at the body of Charles. Tarzan was holding the shivering, aghast Elena, who screamed again and again as she watched the scene below.
Then, N’Kimba was beside them, taking the girl in her arms, turning her head away from the horror below, speaking softly to her.
Below them, in the fading firelight, at least a dozen prowling lionesses stalking beneath the tree, roared their hunger and frustration. In fact, Tarzan noticed, more seemed to be joining them. All attention was upon the elusive prey that had fled just out of reach.

Buy Tarzan in the Heart of Darkness On Amazon