You are here: Home / Fiction / Romance / Tangled Up In You: A Rogue Series Novel by Lara Ward Cosio 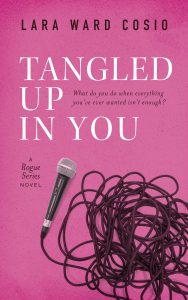 Gavin McManus is exact right person to be the lead singer of a band like Rogue. He’s got the requisite disheveled good looks, confidence, and undeniable magnetism, but what sets him apart is the way he funnels the childhood pain of his mother abandoning him into wounded-rock-star mystique.

Sophie Kavanaugh was drawn to Gavin long before he found fame. Her own desire to be what he needed, to somehow be the one to fix him, lasted beyond what should have simply been a memorable school-days romance.

Their reunion several years later happens just as Gavin’s band, Rogue, has made a splash in the college music scene, and there’s no turning back.

Over the course of three more albums and the next decade, Rogue earns their place as the biggest band in the world, while Sophie finds her own career as a model. They exude the outward appearance of the perfect rock star/supermodel couple. At the same time, Conor, Gavin’s best friend and the band’s guitarist, struggles to contain his deepening feelings for Sophie. But no matter what tests Gavin and Sophie face, their need for each other never wavers. It’s what works for them. Until it doesn’t.

When the truth about Gavin’s mother is revealed, the ensuing media storm and backlash sends him into a downward spiral that threatens to destroy everything he’s worked for, including his marriage, his friendships, and his band.

What Inspired You to Write Your Book?
After I wrote Playing At Love (part of the Rogue Series), I realized that I really wanted to fill in more of those characters' backstories. There was a lot that I, as the author, knew about them and that was alluded to in that book that begged to be explored in greater detail. I also wanted to write Tangled Up In You to see if readers would have made the same choice Sophie makes with her love triangle. I've already had some interesting feedback on that one!

How Did You Come up With Your Characters?
The characters have been bouncing around my head for a long time, and were inspired by wondering about the dynamics within a long-established band. It always seemed to me that the band members become like both family and partners in a way and that when one's personal life is in upheaval they all feel it. That then sent me thinking about where artistic inspiration comes from and does it have to come from a place of suffering or pain? In my characters' cases, one (the singer) is motivated by the pain he felt from having been abandoned as a child, and the other (the guitarist) manufactures his own angst to take his music to the next level. Along the way, their love lives get entangled as well.

Links to Purchase Print Books
Buy Tangled Up In You: A Rogue Series Novel Print Edition at Amazon

Buy Tangled Up In You: A Rogue Series Novel On Amazon