You are here: Home / Fiction / Horror / Tales From The Tangled Wood: Six Stories to SERIOUSLY Creep You Out by Steve Vernon 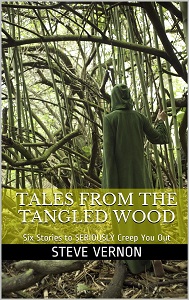 A collection of six new stories to SERIOUSLY creep you out!

The Hunter’s Heart – a dark retelling of the Snow White legend, told from the hunter’s point of view.

The Other Side Of The Moon Is A Lonely Midnight Shadow – an eerie werewolf tale, set in a strange steampunk kind of wilderness.

The Bridge – in a post-apocalyptic wasteland the last motorcyclist meets a very strange obstacle.

Something In The Pine Resin – she was only a ship’s figurehead, wasn’t she?

A Wriggle of Maggot – he brought something home from the war, something to be passed down.

A Hole Full of Nothing – the hard and brutal tale of a teenage fight club, based on a true story.

WHAT FOLKS ARE SAYING ABOUT STEVE VERNON’S WRITING!

“If Harlan Ellison, Richard Matheson and Robert Bloch had a three-way sex romp in a hot tub, and then a team of scientists came in and filtered out the water and mixed the leftover DNA into a test tube, the resulting genetic experiment would most likely grow up into Steve Vernon.” – Bookgasm

“Steve Vernon is something of an anomaly in the world of horror literature. He’s one of the freshest new voices in the genre although his career has spanned twenty years. Writing with a rare swagger and confidence, Steve Vernon can lead his readers through an entire gamut of emotions from outright fear and repulsion to pity and laughter.” – Cemetery Dance

“Armed with a bizarre sense of humor, a huge amount of originality, a flair for taking risks and a strong grasp of characterization – Steve’s got the chops for sure.” – Dark Discoveries

“Steve Vernon is a hard writer to pin down. And that’s a good thing.” – Dark Scribe Magazine

“This genre needs new blood and Steve Vernon is quite a transfusion.” –Edward Lee, author of FLESH GOTHIC and CITY INFERNAL

“Steve Vernon is one of the finest new talents of horror and dark fiction” – Owl Goingback, author of CROTA

“Steve Vernon was born to write. He’s the real deal and we’re lucky to have him.” – Richard Chizmar

What Inspired You to Write Your Book?
I have always enjoyed writing and reading weird and spooky stories. These days, the older I get the weirder and more twisted my stories continue to grow. I am that sadly-wolfed pine tree on the side of the sea cliff that just will not grow straight!

How Did You Come up With Your Characters?
Remember, Tales From The Tangled Wood: Six Stories to SERIOUSLY Creep You Out is a collection – so asking me how I come up with my characters is guaranteed to result in me asking you, “Which characters?”. Still, if you insist upon knowing then let me tell you this.

When I create a character it is a little like reaching into a deep pond and snatching up a pebble from about six feet below. You kind of have to stick your head in and reach right out and grope around in the mud to see just what exactly you will come up with next.

The storytellers have it all wrong. Hearts are rarely sweet, nor are they tender. The heart is, without a doubt, the toughest meat in the carcass. You need to soak the heart in strong red wine to cook it properly, five days marinating is good, with the savor of a little garlic and some onion and a bay leaf and a stick or two of cinnamon. A lot of coarsely ground black pepper for certain sure, and a whole lot of tears.

The heart has a skin of its very own. It has a membrane that is both thin and strong that holds the organ safe against the thunderstorm of its own beating, or perhaps it merely hides whatever darkness that might be concealed deep inside.

“The girl must die,” was what you said.

You told it to me, my Queen. You threw my duty at me like a heavy and certain hunting spear. You commanded me, and because I had looked too long into the wishing pool of your eyes my heart softened. I would do whatever you asked of me.

I had no choice.

“Take her out into the woods, as deep as you can,” you told me. “And cut her heart out and bring it back to me.”

So I walked to the edge of the woods and I threw a stone into the darkness and I followed the path of the stone. You must understand that I never actually found the stone I threw, but I followed it nonetheless.

I wore a pair of iron soled boots and I walked into the deep north woods until my boot soles were worn down to the thinnest of tin. For a time I walked upon the meat of my own shadow and when shadow meat was worn to wind I learned to walk upon myself, until nothing was left but the trust of simple truth.

The truth was, I could not take her life, no matter how many forest shadows grew about me to hide the terrible deed that you wanted me to do.

“And when you return bring me her heart within a chest of black oak,” you said to me. “And I will burn it on a fire, so that I may know that she is truly dead.”

And it was here and only here that my heart failed me and my aim fell far short of my mark. Every time that I reached for the hilt of my hunting knife to end this bitter song, the hilt softened in my hand like wet willow and slipped from my grasp.
I could not do it.

I walked deep into the heart of the dark north woods, leading the girl behind me on a leash of softly chewed leather. She was a fair wee thing, her flesh as pale as the white snow of early winter, her cheeks as red as a pyre of burning roses, her hair as black as the ebony of moonlit grave shadow and for this they called her Snow White.

About the Author:
Steve Vernon has been writing and telling his stories for over four decades.
You’d think that after four decades the man would REALLY find something better to do with his time!

Links to Purchase eBooks
Link To Buy Tales From The Tangled Wood: Six Stories to SERIOUSLY Creep You Out On Amazon