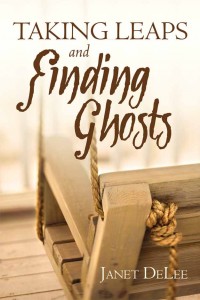 Dreams aren’t just for the young, and baby boomer Ginny Lawther
is happy to prove that she can still brave a leap of faith…she just
needs a little prodding from like-minded individuals. Step one: place
an ad in the local newspaper inviting other dreamers to form an
Ideal Life Club. Step two: see if anyone shows up.

When Ginny meets four hopeful strangers at the first club meeting,
she thinks they’re off to a great start. Now it’s only a matter of time
before the sixty-something widow Hilda, turns her crafting into a
full-time career; the twenty-something Jerry becomes a professional
musician; and the thirty-something housewife Lydia publishes her
cookbook. That is, until the rugged divorcé, Lee, sets a goal to solve
his ghost problem—and upends all their lives!

Suddenly the support group isn’t just trying to navigate the ups and
downs of pursuing their dreams; they’re also wrestling with a strange
cast of spirits who keep interrupting their endeavors. What do these
apparitions want? And why have they latched on to the Ideal Lifers?

What Inspired You to Write Your Book?
I’m inspired to write ghost mysteries because I’ve had some weird experiences in bed and breakfasts and in a hotel in New Orleans that gave the shivers. I thought it would be fun to write ghost mysteries with clues and red herrings that readers could grapple with to figure out what is up with the ghost and solve the mystery of their shenanigans. There is a certain amount of humor in the situations the characters find themselves in and the ghosts add to the fun.
Also, because I’m something of a late blooming baby boomer, I’ve decided to devote the rest of my life to taking leaps of faith and carve out the sort of life I call ideal. That ideal life requires chasing all sorts of dreams that have been on the back burner a long time. I figure there are other folks out there that may be hanging back on dreams, and I hope my new series encourages them to move forward.

How Did You Come up With Your Characters?
I came up with baby boomer Ginny Lawther as a fun, determined character to inspire readers to pursue their dreams. Ginny believes there is no expiration date on making dreams come true and she has a whole flock of dreams she wants to make happen so that she can carve out her ideal life.

Ginny and Lee stood on her back porch facing the newly completed utility room. The crew had already left, having packed up all the tools and cleaned the last of the construction debris after installing the washer and dryer. Within minutes of their leaving, Ginny started her first load of laundry. Lee hung around with her on the back porch as they both listened to the sound of the washer churning briskly. “I love the sound of laundry washing,” said Ginny. “It still makes me gloat, thinking of all those years I had to use the Laundromat when I was in my twenties.” Lee looked at Ginny, who was standing with her hands on her hips while smiling at the washing machine. What he saw was a thoroughly happy woman, and that gave him a deep down feeling of satisfaction. “Takes me back to my childhood,” he said, “laundry day with my grandmother.” “Grandparents are one of the best things about childhood. Don’t you agree? My Granny Sadie was a lot of fun.”
Lee suddenly looked uncomfortable and Ginny thought, “Is that man blushing?” Then she remembered him talking about his grandmother being a medium and put two-and-two together. Lee shot her a look that seemed to indicate it was a subject he’d rather not talk about but answered her nonetheless. “Yes, like I told you before, mine was a bit eccentric but loveable. Often when I came home from school she’d have a batch of oatmeal cookies just out of the oven, usually on laundry day because she knew I’d help her fold and put away the clothes. To this day, if I smell oatmeal cookies baking, I always get a good feeling.”

The expression on Lee’s face made Ginny think that might be a useful piece of information to pass along to Frieda. Ginny smiled at Lee and replied, “I feel the same way whenever I smell pumpkin pie baking.” Lee smiled and nodded. “Me too.” “I read in a magazine once that men respond to the smell of pumpkin and vanilla–that it turns them on. Do you think it’s true?” Lee chuckled and then pretended to give her question serious consideration. “Hmm, maybe, but don’t give Frieda any ideas,” he said, winking at Ginny. Ginny couldn’t help giggling, “I don’t know what you’re talking about.” “The hell you don’t,” Lee said with a grin as he turned to walk back in the house, holding the door for her. “I’ve got to head out, but you’re all set, Ginny.” “I sure am, and thank you, Lee. You did a great job and here you go,” she said, reaching for the check she had left on the kitchen counter. “For services rendered.” Lee folded the check and tucked it into his shirt pocket. “I’m glad I could help.” “You sure did and I’m grateful.” She gave him a hug, noticing how he smelled of warm clean cotton. Over the years she had learned to trust her sense of smell as an indicator of the type of person she was dealing with. Lee smelled like good folks–comforting.

Ginny followed him as he walked toward the front door. “Have you had any more disturbances in your jobs that you can test the energy-clearing method on?” Lee had reached for the front door knob but turned around to look at her curiously when she asked this. “No, the projects I’ve got in the works now are going so well that I’m beginning to wonder if those earlier disturbances were just an overactive imagination.” “What happened in my house was real enough.” Lee looked thoughtful, “That’s true. I don’t know what it all means, but for some time now I’ve been disturbance-free, with nothing but the typical types of challenges in renovation. It’s been a relief because those are problems I can do something about.” “Maybe the clearing you did at my house encompassed other aspects of your life.” “Yeah, maybe,” he said doubtfully. “Have you had any more problems?” “Not a one.” “Good. Well, I’ll see you at the next meeting. Enjoy your new home.” He took one last approving look around the living room and then opened the front door. “Okay, Lee. Grazie mille, as they say in Italy.”

As Lee stepped out onto the porch, she saw him suddenly jerk his head to the right, looking surprised. “Lee?” He paused a few seconds before saying, “Thought I saw something.” He sounded troubled, but when he turned around to look at her he was grinning wickedly. “Very funny, Mister Smarty!” Ginny responded in the way she used to do with her little brother, Sam. Nevertheless, she stepped out on the porch behind Lee and looked to the right. The empty swing was swaying slightly in the light breeze.

Lee crossed the porch and went down the stairs. When he reached the curb he took off his tool belt and tossed it in the back of the truck, waving to Ginny as he opened the door and got in. Ginny watched as he drove off. She looked back at the swing seat and decided to sit a spell. As she sat there lulled by the rocking motion, she let out a contented sigh. “Home sweet home at last.”

Unknown to Ginny, Lee drove away rattled. He didn’t want to worry Ginny and he only half believed what he had seen on the porch, but as he walked out the door, he got a flash of a little old lady perched on the swing seat. When he jerked his head in that direction to focus his full attention on the swing, nothing was there. Lee gritted his teeth as he drove down the street, trying to decide if he should tell Ginny or wait and see. He didn’t want to alarm her, but the lady on the swing made him worry that there would be further trouble. He remembered his grandmother’s warning, Deny it all you want, Lee, but you’ve got the gift. “It couldn’t be an unstoppable curve ball or the kind of luck that wins in Vegas–oh hell no!” Lee groused. “Well, I’ll keep my mouth shut for now. If I saw what I thought I saw, sooner or later something else may occur, and then I’ll have to tell Ginny.” He sighed. “I feel like a damn jinx.”