You are here: Home / Fiction / Romance - Erotica / Taken By Storm by M.J. Schiller 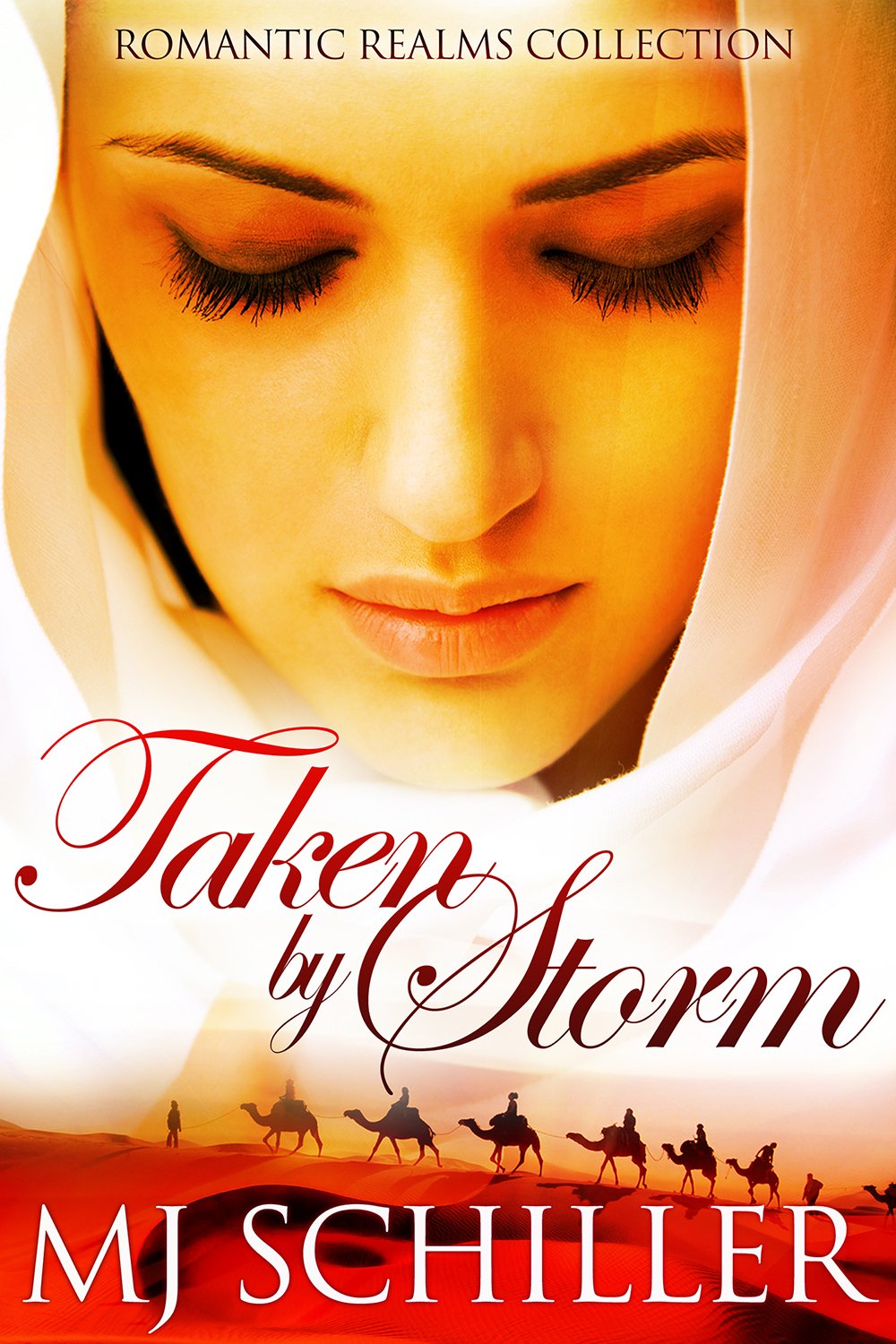 When he returns from a trip, Prince Tahj senses unrest…

…. even before his best friend and captain, Radeem, warns him. Radeem heard rumors and suspects the King’s advisor is planning to overthrow the crown. The darkly bitter Grand Vizier, Lord Boltar, is about to claim what he believes belongs to him, the rule of Avistad.

Stolen from her home, Bashea is left bound and gagged on the prince’s bedroom floor.

Just as Tahj discovers a captive girl in his bedroom, left as a “gift” from Lord Boltar, fighting erupts. Tahj, Radeem, and Bashea escape the castle in a hail of arrows. The pair is drawn closer together as they face various perils, Boltar’s soldiers, a screaming panther, even the scathing winds of a desert storm.

Born from the fire of a coup, Tahj and Bashea’s relationship burns with a passion that neither of them quite understands.

After what she went through at the hands of Boltar’s men, Bashea is afraid to trust. Yet it is her fiery nature that both appeals to Tahj, and drives him crazy. In fact, when Bashea’s brother, Bagrat, informs Tahj that Bashea means “lips of the gods,” he retorts, “Are you sure you don’t mean tongue of the devil?” It takes a long separation to bring them back to each other, but when Tahj does return, it is once again during a battle with Lord Boltar. But now the overlord, who has been forced beyond reason by Tahj’s success in retaking the throne, is an even more dangerous threat than before. Reunited, will Tahj and Bashea be strong enough to defeat their twisted and powerful enemy?

What Inspired You to Write Your Book?
Watching “Troy.” It also was inspired in part by “The Prince of Egypt.”

How Did You Come up With Your Characters?
I knew the general concept I wanted, a girl brought before the prince as a present. From that I developed my soft-hearted prince and my feisty but loving shepherdess. Radeem was just for fun.

Book Sample
The King of Avistad was dying, and there were those who wanted to hasten his death all the more. Young Prince Tahj knew this. He knew it as he was walking down to the throne room, his footsteps ringing in the empty hallway, his heart beating a mile a minute. The twenty-three-year-old prince had found that very thought weighing on his mind day and night since his older brother, Kadeesh, was killed in a war with the neighboring kingdom of Subda.

Tahj remembered the day he learned of Kadeesh’s death. He was knocking around a cloth ball with his friend, Radeem, juggling it on his ankles and knees, when the messenger arrived. His mother’s wail pierced through him, ripping a hole in his life that left Kadeesh on the other side of a great chasm. Kadeesh had been the brightest jewel in his father’s turban, tall, with a bronzed, even complexion, radiant teeth, and a heart bigger than the very breadth of the good king’s lands. He was a kind brother to Tahj, though six years his senior, and had always managed to spend time with the younger boy when he was home.

Since the fateful day Kadeesh was killed, the king had trained Tahj to take his brother’s place as heir to the throne. Tahj accepted the mantle unwillingly; he did not believe himself to be the born leader his brother was. Maybe it was because Kadeesh was always there to lead the way; Tahj had become comfortable in his role as the understudy. And now, thrust into the limelight, he felt like a fool, strutting around and putting on airs he did not deserve. The place belonged to another. But, no matter what his feelings on the subject were, he knew it was his obligation to step up and bear the responsibility as best he could, for his mother, for his father, and for all of Avistad.

Tahj felt the little stab that had become so familiar whenever he thought of his brother and accepted the pain as he traversed the long hall, glancing up at the dozens of colorful, triangular banners rolling in the breeze off of the adjoining courtyard like waves in the sea. Light still streamed in, ducking between the pillars separating the courtyard at his left from the hallway. Though it was late afternoon, its rays still felt warm on his shoulder as he strode purposefully forward. It always amazed him that outside the thick walls of the palace, the sun could roast you alive, but within its shadowed walls, there was a chill that could never be permanently shaken.