You are here: Home / Fiction / Fantasy / Tainted by H.C. Cavall 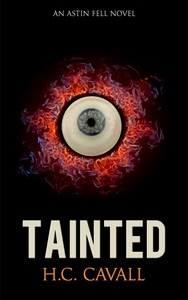 Astin Fell lives a normal life as a struggling barista until, one night, he suddenly sprouts wings and horns. Astin has “expressed” as an Other, a mythological creature trapped in a human shell. The problem is, no one seems to know just what kind of creature he is. To make matters worse, he’s drawn the attention of the Taint, an ancient horror devouring the universe one tiny piece at a time. Whatever it consumes, it adds to its army—permanently.

And it’s hell bent on making Astin its next victim.

Thrown headfirst into a world where creatures of myth hide among society, Astin must learn to use his new powers while staying one step ahead of the Taint. He’ll have help: Nemesis, the shotgun toting, bike riding Goddess of Vengeance; Claudia Fischer, a woman with three souls bonded inside her; his nightmarish vampyre ex-girlfriend; and his telepathic house cat. But if Astin and his friends can’t unravel the dark conspiracy lurking among the Other, the extradimensional horrors will devour them… and then, the entire city.

What Inspired You to Write Your Book?
To be honest, the main character showed up more or less whole one day. Not coincidentally, I had just watched Maleficent the day before, so it's entirely possible Jolie's fantastic performance lent Astin his physical form. Nevertheless, the personality is his own—and after Astin was there, the rest of the book was fairly easy to drive.

How Did You Come up With Your Characters?
Astin himself just kind of showed up out of nowhere, fully formed. Nemesis was a character I had used in previous (unsuccessful) short stories. Beyond that, characters were conceived as each scene comes up. For example, I can't possibly tell you why or how I ended up with Claudia/Anne/Meryl—it just happened. They weren't necessary to drive the high level plot, and I have no idea how I came up with the "split personality" gimmick to this day.

Book Sample
As I left the apartment building, I realized three things.

First, I had buttoned my shirt wrong, and it was really pissing me off.

Second, I had no car. Mary had driven me to her apartment, and I didn’t know where the bus stops were around here.

And third, I was losing my fucking mind.

I was hallucinating. It was the only explanation. The thing in the hoodie must’ve been a mugger—or worse, some poor kid that I hit with my car. Whatever was wrong with me just cost me my lover and muse. And, at the rate I was going, it would cost me even worse.

First things first. Get to a hospital. Get help.

I looked around. The dark streets were quiet and deserted. A faint gust caught some powdery snow, blowing a misty trail down the sidewalk. I shivered violently, realizing I had left my coat at Mary’s, and that my shirt *still* wasn’t buttoned right. I crossed my arms tightly and started walking as fast as I could. I was either going to find a ride, make it there on foot, or… I don’t know. Freeze to death, I guess. At the very least, I wanted to go down fighting.

Some spirit or force barreled through me, making my head swim. I wobbled over to the apartment building and thrust a hand out to steady myself. Probably a side effect of whatever’s wrong, I thought. I was *really* worried now. Was it a stroke? I mean, I was fairly young, but young people have strokes, too. How do I check that? You smile or something, right? I smiled. Everything seemed to work okay.

The world went fuzzy, and I found myself on my knees with one hell of a backache. It’s a good thing I fell forward, because whatever hit me smashed into the side of the building next, and it took pieces of the masonry with it. I staggered to my feet and went forward. It was more a continuous fall then stumbling, but it got the job done. There was an alley on my left, and in an absolutely brilliant move, I lurched into it. I’m not really sure where I thought I was going to go. Getting nailed in the spine tends to ruin practical thinking.

I heard the scrape of the weapon against the sidewalk, and I saw the shadow approaching. Whoever it was, they weren't out for money. They were *stalking* me, slow and deliberate. There was no way I wanted to fight someone like that, especially if they were armed. I looked around frantically for a way out, then launched myself at a flimsy looking door. The lock gave, dumping me unceremoniously into an old boiler room. I slammed the door shut and wedged a cobweb covered chair under the doorknob, then slumped and put all my weight against the door. I prayed to whatever higher power existed that they didn’t see where I went. It had to be the woman from last night. It *had* to be. I huddled closer into my wings, hurt and scared. The dim white light they radiated seemed to be helping with the pain, but oh my God now is not the time for this, brain, I don’t have wings, stop fucking up on me before—

A fist smashed through the wood and ripped off the bottom half of the door. Someone had grabbed me by the hair and was dragging me through the hole. I screamed and kicked for all I was worth, and somehow, I twisted around just enough to get a shot at them. I took the only one I had.

I gored the son of a bitch with my horns.

My attacker screamed in pain and dumped me on the concrete, and I finally got a good look at him. He seemed human enough, save for the pointed ears. The flesh around his torn shirt sweated black ichor, closing the wounds before seeping back into his pores. I saw his eyes for the first time. Tiny liquid clouds of black swirled through both eyeballs. Out of everything that had happened, that struck me as the most unnatural. And that *really* scared me.

“Lucky shot.” The hand that wasn’t holding a metal pipe flickered, and a blue flame sprung up around it. “Looks like we’re doing this the hard way.”

I wish I could say I had a witty retort, but the only thing I remember saying was, and I quote, “Shit.”

The motorcycle came from behind me, its headlights flooding the alley. I didn’t have time to wonder who was driving it. It had already lurched sideways and was careening down the alley, sparks flying from the pavement. I threw myself to the side, and it missed me by a breath. The guy with the pointy ears wasn’t so lucky. It caught him full flush in the legs, and he faceplanted on the concrete with a queasy smack. He pulled himself up to all fours, bleeding profusely from his nose, and caught a couple of pistol shots in the shoulder for his trouble.

The woman from the parking lot grabbed me by the back of my collar and threw me—and I mean *threw* me. I soared over concrete into the side of a dumpster. If I didn’t instinctively air brake with my new wings, I might’ve had a broken back then and there. Instead, I bounced off it face first with a clang. I looked up woozily in time to see her pull out what looked like a TEC-9, and she opened fire without hesitation, the steady stream of lead leaving him jerking and dancing like a bad marionette. The smell was awful. It was like wet human sick and burning garbage. I didn’t see anything after that. I was too busy huddling up in a ball, head throbbing and hands clamped over my ears.

When the cacophony had finally ended, I looked up. My heroine in shining leather was glaring down at the guy with the pipe, who was now back-first in a pile of black goo and gore. He had been perforated in multiple places and was missing a quarter of his skull. I felt ill, and if I hadn’t already have puked my guts out at Mary’s apartment, I would’ve done it then.

The guy’s remains twitched once, then began violently convulsing. Slowly, it pulled into an arch, rolling straight up to its feet in one rubbery contortion.

“You won’t win, Daughter of Nyx.” The voice was a wet, gurgling whisper, the only thing it could get through its shattered trachea. “We’re everywhere now. And we’ll find you.”

She reached into her coat and pulled out a Desert Eagle. A freaking .50 caliber Desert Eagle. It sounded like a bomb going off when she splattered his head all over the walls. I stared mutely as his body disintegrated into dark slime, trickling through cracks, around corners, and into the shadows.

“Asshole.” She righted her motorcycle, then turned and glared at me. “You. Bike. Now.”

I gave her a blank look. Red hair. Black bodysuit and pants. Black boots. Aviator shades in the middle of the night. And, apparently, a small military arsenal in her leather trench coat.

“What?” was all I could manage.

“Get on the goddamn bike!”

I may have not had any clue what was happening, but I *did* know it was a bad idea to piss her off. I ran over and clumsily tucked in behind her. The instant my ass hit the seat, she accelerated with a wheelie and a scream of tires. I hung on for dear life as the bike rocketed out of the alley.