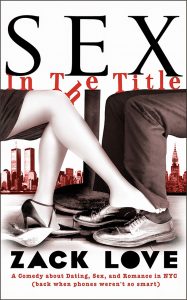 New York City, May 2000. The Internet bubble has burst and Evan, a computer programmer, is fired with an email from his boss. The next day, his girlfriend dumps him, also via email. Afraid to check any more emails, Evan desperately seeks a rebound romance but the catastrophes that ensue go from bad to hilariously worse. Fortunately, Evan meets Sammy -- someone whose legendary disasters with females eclipse even his own. To reverse their fortunes, they recruit their friends -- Trevor, Yi, and … END_OF_DOCUMENT_TOKEN_TO_BE_REPLACED

About Zack Love: Zack Love graduated from Harvard College, where he studied mostly literature, psychology, philosophy, and film. After college, he moved to New York City and took a corporate consulting job that had absolutely nothing to do with his studies. The attacks of September 11, 2001 inspired him to write a novelette titled “The Doorman" and heightened his interest in the Middle East. A decade later, that interest extended to the Syrian Civil War, which provided the backdrop for his … END_OF_DOCUMENT_TOKEN_TO_BE_REPLACED