Five years after the death of his wife, MacAoidh Armstrong moves into a smallholding in southern Scotland with the intention of living a self-sufficient existence. In the nearby town solicitor Libby Butler is trying to find peace after her recent deadly brush with the unknown. On a hill by the steading stands The Ghost Tree: all that remains of the former Ringcroft of Stocking. Local legend says that when the last Ghost Tree dies, the Rerrick Parish Poltergeist will return. Just days after … END_OF_DOCUMENT_TOKEN_TO_BE_REPLACED 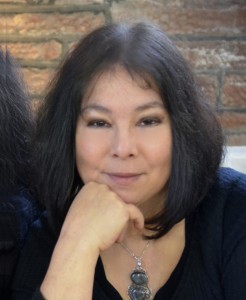 About Sara Bain: A newspaper journalist and editor, London-born Sara Bain is a fantasy and paranormal fiction writer who now lives in South West Scotland. What inspires you to write? Tolkein introduced me to fantasy and the old Hammer films to horror. I love that sense of other-worldliness that fantasy fiction conveys. It’s a place to get lost in; another world to explore and follow the fortunes, and misfortunes, of the characters that inhabit it. The Scottish landscape, especially the … END_OF_DOCUMENT_TOKEN_TO_BE_REPLACED

LONDON solicitor Libby Butler’s life is in mess. Her affair with her boss is going nowhere as is her position in a city law firm. A narrow escape from the knife of south London’s elusive serial murderer, The Vampire Killer, has challenged her outward bravado and left her nerves in tatters. When duty calls Libby to a police station in the middle of the night, she meets the enigmatic Gabriel Radley. Dressed like an ancient warrior, Gabriel has a habit of disappearing from police custody and … END_OF_DOCUMENT_TOKEN_TO_BE_REPLACED