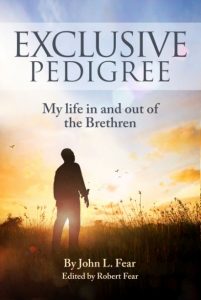 Exclusive Pedigree by John L Fear, Robert Fear, and Alastair Fear John Fear was born into a religious sect known as the Exclusive Brethren. This sheltered him from the outside world as he grew up, but could not hide him from its influences. A struggle began in his mind that led him to leave the Brethren, along with his young family. This is a story that was always meant to be told. During his later life John Fear had prepared a lot of the book, along with notes for chapters that he knew … END_OF_DOCUMENT_TOKEN_TO_BE_REPLACED