What REALLY happened at the dawn of that amazing civilization? Nobody REALLY knows. So you (a historical fiction writer) think you can just fabricate the stuff. Not quite. There are plenty of people (I am excluding professional historians and archaeologists here) who do know. You have to do your research; and that’s when the trouble starts. Time-lines especially become a blur of contradictions and "facts" are constantly superseded by new findings. Take Dynasties 00 to 03, for example. … END_OF_DOCUMENT_TOKEN_TO_BE_REPLACED

Author Bio:John and Shelia Chapman co-author the successful 'A Vested Interest' romantic technothriller series. I, John was born in Northern England, Shelia hails from Louisiana in the US. We met over Internet in 1997 and immediately were struck by our common tastes. We liked the same music and books, shared the same views on life, had a common interest in science and technology and liked fiddling with gadgets - especially computers. We even went shopping on the same day and bought the same … END_OF_DOCUMENT_TOKEN_TO_BE_REPLACED 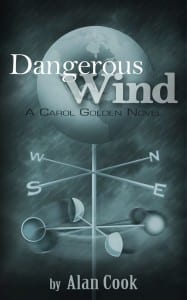 In the third Carol Golden novel, Dangerous Wind, Carol is abducted from Chapel Hill, North Carolina where she lives with her grandmother and is thrown into an adventure that will take her to all seven continents. It involves a former boyfriend she doesn’t remember (because of her amnesia), who is trying to bring about the “downfall of the Western World” according to people in power. While Carol is hunting for the bad guys she has to sort out the truth and figure out who they really are. But she … END_OF_DOCUMENT_TOKEN_TO_BE_REPLACED