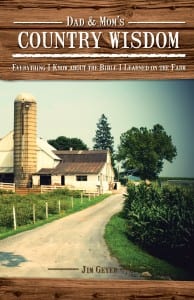 This book is bargain priced from 04/03/2014 until 04/07/2014 Author Jim Geyer says he has two blessings in life. The first blessing was godly parents who daily instilled in him biblical and moral values by both word and example. The second blessing was being raised on a farm where he was taught informed by God’s marvelous creation. Travel with Jim Geyer to a time when a man’s word was his bond, when a handshake was all that was needed to consummate an agreement, a time when doors were seldom … END_OF_DOCUMENT_TOKEN_TO_BE_REPLACED