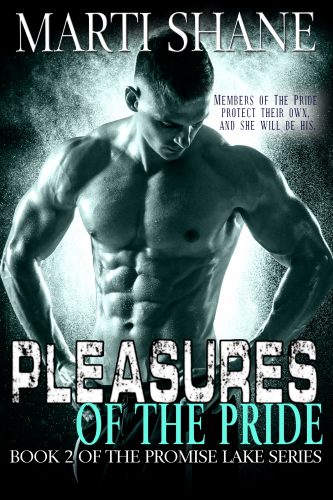 Pleasures of The Pride by Marti Shane Alexis cried it out on her garage floor, knowing Cyrus Lee would be back to collect what he said her father owed him. Blinded from pepper spray and too beaten to breathe, she swore the bastard would never see a dime. She called The Pride. I mean, every girl's father leaves a dial-a-hero number tucked behind the Monet, right? She must have gotten the number wrong, because the hero is Nicholas Lee, Cyrus Lee's son. … END_OF_DOCUMENT_TOKEN_TO_BE_REPLACED

Sam’s escape to Promise Lake is to grieve and regroup before taking on her partnership at Atlanta’s top staffing firm. Instead, she finds herself fighting consciousness in her sinking car when the bridge gave way. Waking up to Jake, her firm’s newly signed client, and her ex’s best friend, gives the word “regroup” a whole new meaning. Jake, on break after his third Major League season, needs to set the record straight with Sam. The stripped-down version he pulls from a terrifying crash is even … END_OF_DOCUMENT_TOKEN_TO_BE_REPLACED