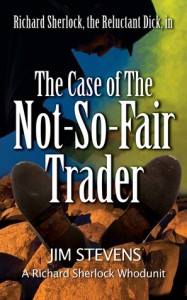 This book is bargain priced from 07/17/2014 until 01/05/2015 A despicable stock trader is found buried under an avalanche of his own garden rocks, causing fired-from-the force- Richard Sherlock to be yanked off the bowling alley and whisked to the crime scene by his pampered protegee Tiffany Richmond. He must prove murder and stop payment of the twelve-million-dollar Richmond Insurance policy. Nothing makes sense. Crime scene is a mess. There is no money trail. There are too many motives … END_OF_DOCUMENT_TOKEN_TO_BE_REPLACED