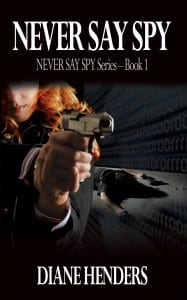 Book 1 of the Never Say Spy series: 13 months on the Kindle Top 100 Free (Women Sleuths) ______________ Despite her penchant for weapons and ripe language, Aydan Kelly’s resumé reads ‘bookkeeper’, not ‘badass’. She’s leaving the city to fulfill her dream of rural tranquillity when she gets carjacked by a man who shouldn’t exist. When RCMP officer John Kane kills her would-be abductor, Aydan thinks her troubles are over. But Kane’s investigation implicates her in an international espionage … END_OF_DOCUMENT_TOKEN_TO_BE_REPLACED