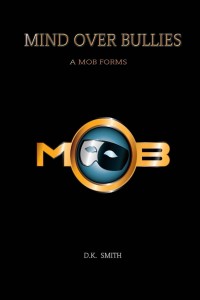 Targeted Age Group:: 13 and Up Category: Children and Young Adult Books Print book price range: $13.70 eBook price range: $3.99 About Mnd Over Bullies - A MOB Forms: "From the opening car chase, this book grabs readers and holds on as it blossoms into a complex action-adventure with multiple intertwining plots. Complex, layered YA that easily appeals to adults, too." -Kirkus Reviews People that feel bullied just need to toughen up. That's what Margo Rios used to think. Margo is … END_OF_DOCUMENT_TOKEN_TO_BE_REPLACED

About D.K. Smith: A native of Los Angeles, D.K. Smith began his writing career after getting news that he would soon become an uncle. Wanting to create stories and characters for his expected niece, he created the children's book series "Sock n Boots Adventures." The two characters (three year old Sock and five year old Boots) began to make names for themselves, generating downloads in countries around the world. From there, the love of storytelling blossomed into novels across multiple … END_OF_DOCUMENT_TOKEN_TO_BE_REPLACED